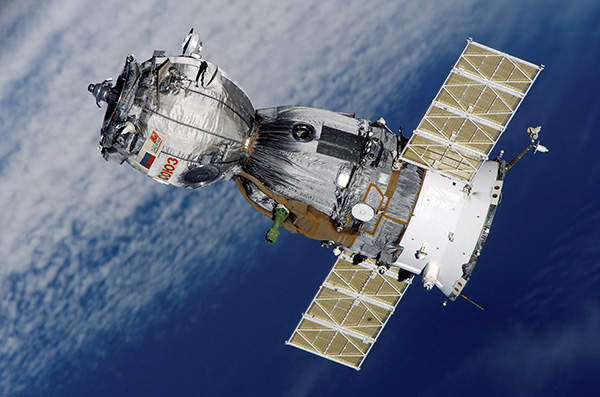 The Soyuz spacecraft is docked to the International Space Station. 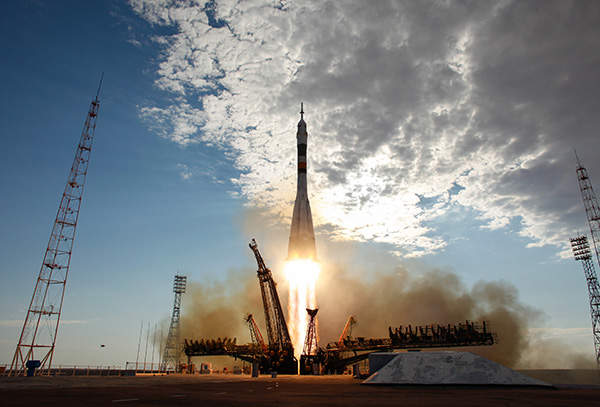 The 114th flight Soyuz TMA-05M was launched on Soyuz-FG rocket from Baikonur Cosmodrome in July 2012. 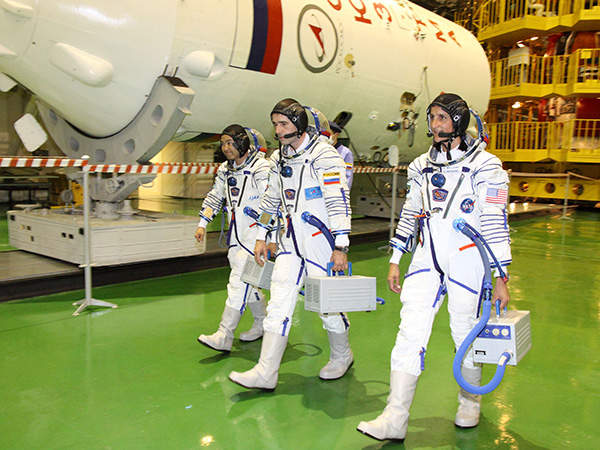 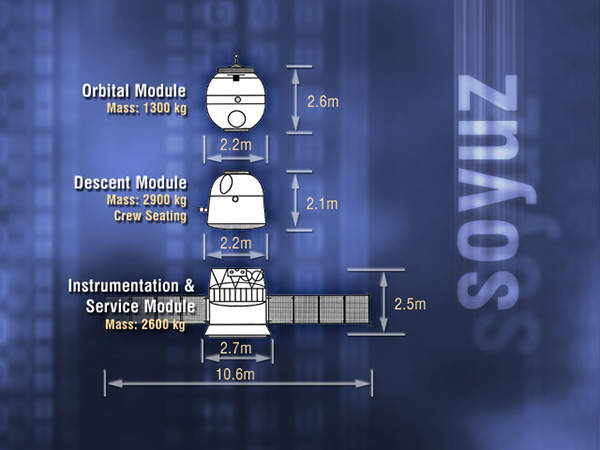 Image showing the modules of the Soyuz spacecraft. 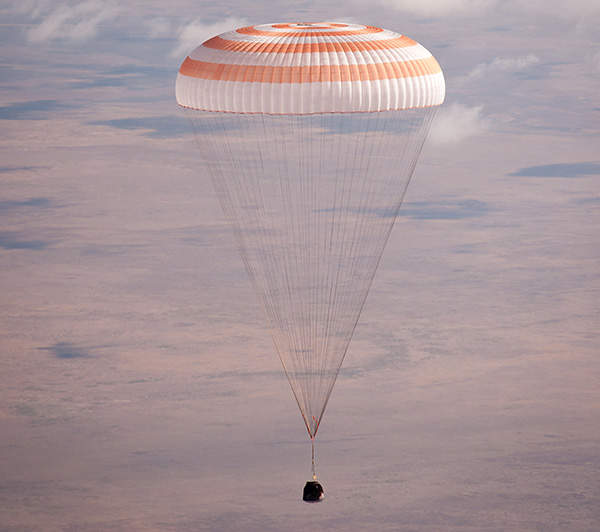 Re-entry module of the Soyuz that carries crew into earth's atmosphere.

The 114th flight Soyuz TMA-05M was launched on Soyuz-FG rocket in July 2012. It carried three crew members to the ISS as part of the Expedition 32. It will conduct about 30 scientific missions and act as the crew rescue vehicle at the ISS.

Soyuz is expected to be the only spacecraft for manned space travel to and from the orbital station until 2015, due to the retirement of the US Space Shuttle. The ISS is docked with at least one Soyuz spacecraft at any given time to cope emergency situations. A new spacecraft Prospective Piloted Transport System (PPTS) is being developed to replace the Soyuz.

Soyuz successfully conducted the first unmanned mission in November 1966. Soyuz 1 was the first manned launch made in April 1967. It, however, crash landed killed the astronaut on board. Soyuz 3 was successful in conducting the manned mission, in October 1968. Another major mission failure occurred with Soyuz 11 in June 1971. It killed three crew members abroad while re-entering the earth.

Design and features of Soyuz

The Soyuz spacecraft has three modules – orbital module, service module and re-entry module. The orbital module is the spheroid shaped fore part of the spacecraft. It has the key equipment, cargo, docking avionics, communication gear and a forward view window. It has an internal volume of six cubic metres and liveable area of five cubic metres for accommodating crew during mission. The cylindrical service module is equipped with instrumentation and propulsion systems, and solar panels. It has electrical supply, temperature control, radio telemetry and communication, control and orientation control systems in pressurised compartment.

The propulsion compartment is non-pressurised and houses the main engine and propulsion systems. The external sensors and low thrust engines of the intermediate compartment enable orientation of the satellite and solar panels. The re-entry module of Soyuz is an aerodynamic compartment that allows re-entry of the crew into earth’s atmosphere. It has about four cubic meter of internal volume and 2.5 cubic meter of usable space. It has heat resistant shield and main and braking parachutes for soft landing.

The internal atmosphere is maintained through KO2 and LiOH cylinders. The spacecraft can provide life support for 30 person days. A noise fairing system which jettisons after entering the atmosphere also provides protection to the vehicle. The spacecraft also has an automated docking system. Operation of the spacecraft can be independent of ground control or by the pilot. Launch to ISS docking of Soyuz takes about two days. It returns to earth in about 3.5 hours.

Mission variants of the Russian spacecraft serving the ISS

The first generation Soyuz spacecraft were designated Soyuz 1 to Soyuz 11. They were based on Igla automated docking system which required special radar antennas, and were launched during 1967-’71. The second generation Soyuz were designated from Soyuz 12 through 40 and were launched during 1973-’81. Soyuz-T was the third generation spacecraft that carried three crew members onboard between 1976 and 1986. It had modernised Igla rendezvous system, solar panels and translation/attitude thruster system.

Soyuz-TM was the fourth generation which saw launching of the spacecraft between 1986 and 2003. Soyuz-TMA version was designed as per the NASA’s requirements to serve the ISS. In November 2000, the first Soyuz capsule transported the crew to the ISS. The first vehicle Soyuz TMA-1 was launched in 2002. Soyuz TMA-22 was the final flight that was undocked from the ISS in April 2012. It has been replaced by more advanced TMA-M series. It supports testing of new technologies for developing new spaceships.