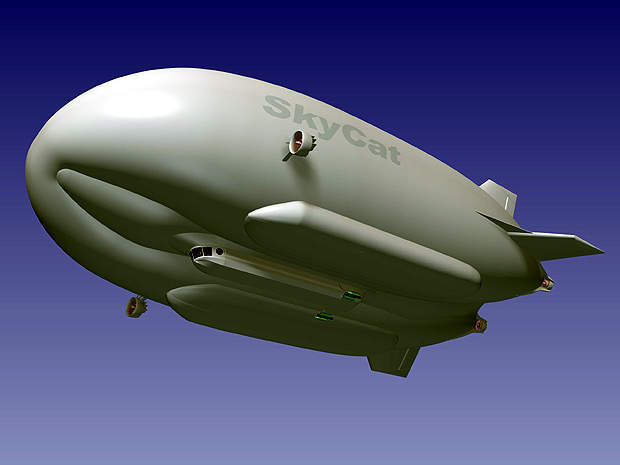 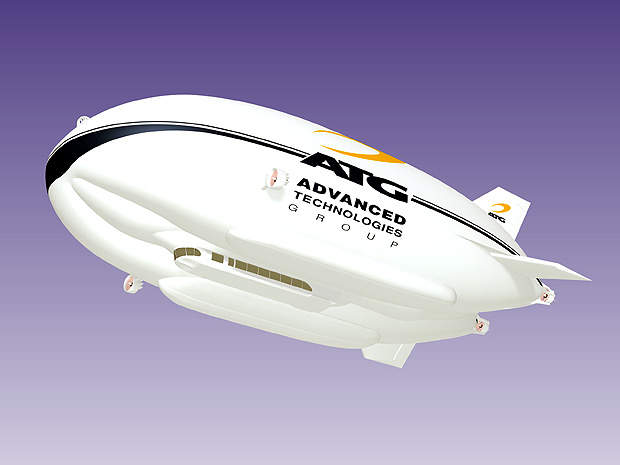 The vehicle will be built in three variants (Skycat 20, SkyCat 200 and SkyCat 1000) with payload capacities from 20,000kg to one million kg. 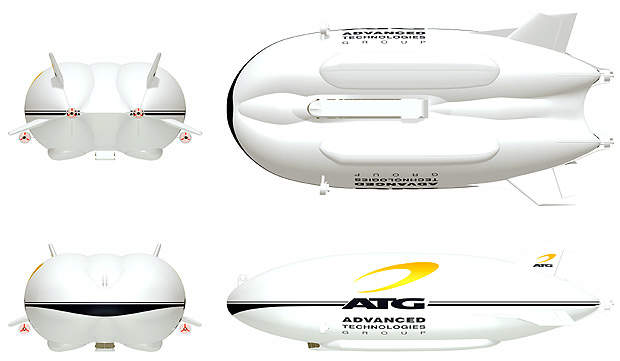 Four views of the SkyCat 20, showing the double-hull shape which provides lift from the aerodynamic design and from the helium inside. 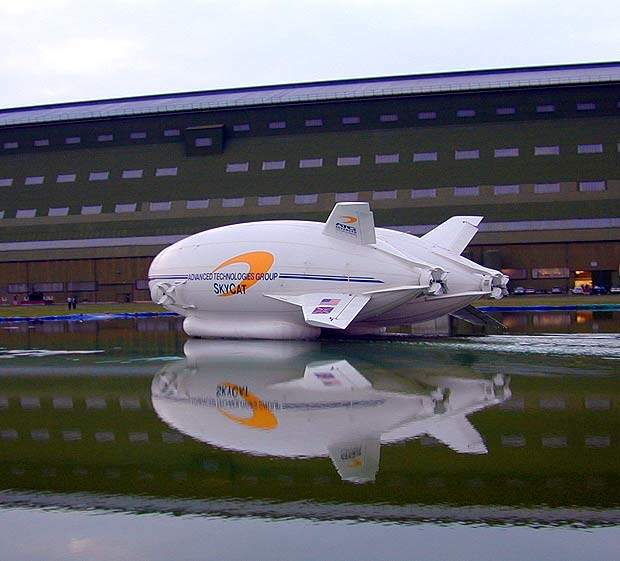 The remotely controlled Sky Kitten prototype, which is 13m long. 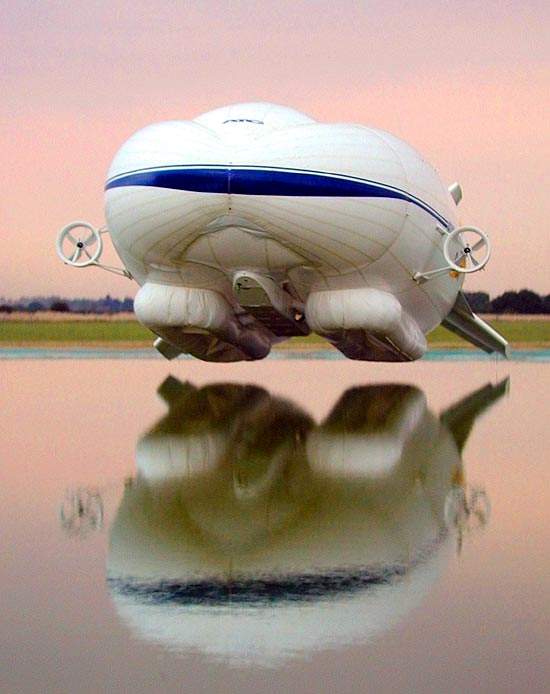 The Sky Kitten prototype first flew in 2000, a proof of principle for the lifting body and the air-cushioned landing system. 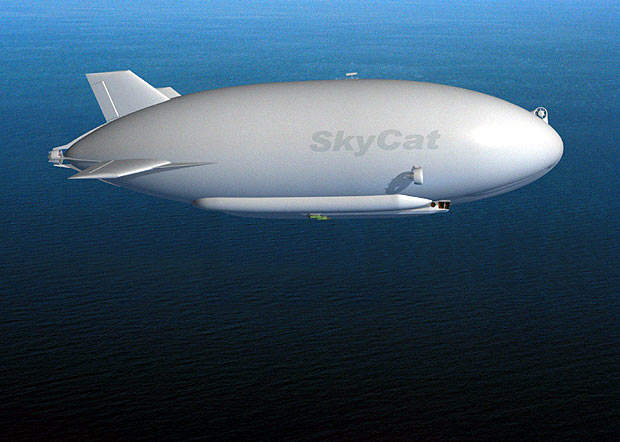 The first SkyCat will be the SkyCat 20 for which the first flight is anticipated in 2005/2006. 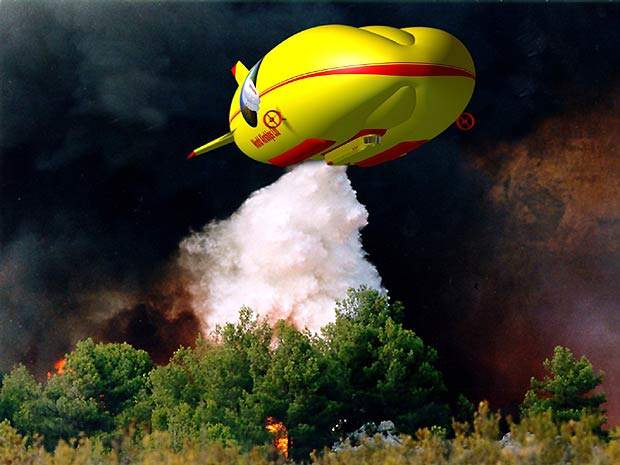 SkyCat 20 could be used for roles including firefighting. 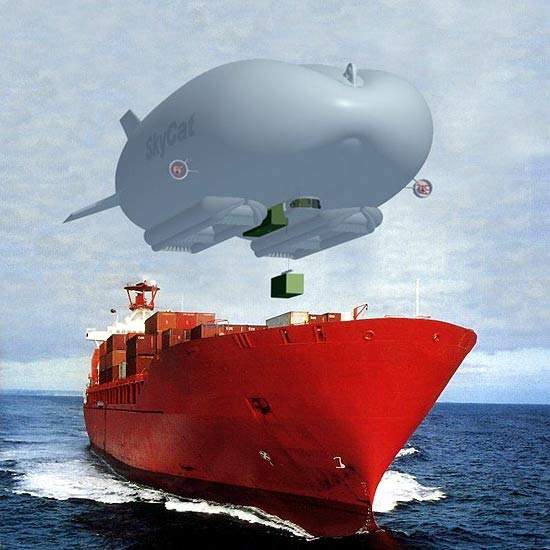 SkyCat can hover on station for extended periods, making it ideal for loading/unloading cargo at sea.

The SkyCat hybrid air vehicles, supplied by Advanced Technologies Group, based in Cardington, Bedfordshire, UK, combine lighter-than-air airship technology and air-cushioned hovercraft technology. The vehicle will be built in three variants, the Skycat 20, 200 and 1000 with payload capacities from 20,000kg to 1,000,000kg. The first SkyCat will be the SkyCat 20 for which the first flight is anticipated in 2006.

In July 2005, the Advanced Technologies Group Ltd went into administration under Part II of the Insolvency Act 1986. The future of the development programme of the SkyCat is thus uncertain.

The SkyCat can be configured as a passenger airship, an ultra heavy cargo ship and as an airborne surveillance platform. Military applications include tactical and strategic air lift, a command, control, computers and information platform, mine countermeasures, airborne early warning and anti-surface warfare.

The SkyCat layout includes an advanced lifting body, an ellipsoidal-shaped cross section hull and a catamaran-hover-cushion system. The development of the SkyCat is based on the proven successful design, manufacture and operation of the fleet of airships by Airship Technologies, which designs and operates more transport and passenger airships than any other airship operator worldwide. The maximum operating altitude is 2,745m.

The envelope structure incorporates a laminated fabric envelope. The envelope is a large bag containing the lighter-than-air helium gas which provides the airship with much of its lift. Helium is an inert gas which is not flammable. The payload module is built on the centre line of the airship. An internal catenary structure supports the payload. The envelope shape is supported by an internal configuration of diaphragms, which can be used to compartmentalise the structure.

The SkyCat has a patented ATG bow-thruster that allows the direction of the nose to be accurately controlled at low speeds, dispensing with the need for large numbers of ground crew.

The main cargo deck provides 195m² (2,100ft²) of clear loading space. The deck is fitted with a military load rated floor. The area above the door aperture provides an additional 195m² floor area and a number of mezzanine floors can be installed to provide additional deck area. Roll on/roll off ramps are installed in the fore and aft of the airship allowing fast and efficient embarkation / disembarkation to the cargo area.

The main cabin of the SkyCat 20 is 22.3m long by 3m wide and is fitted with four passenger seats The cabin has a large side door with integral steps and a full width rear cargo door.

The SkyCat 200 cabin is 49.4m long by 7.5m wide and is equipped with a rear roll on/roll off ramp. There is space for an additional 37m² of floor area above the door aperture.

The flight deck accommodates two pilot stations which are fitted with conventional stick controls. The pilots have an exceptionally wide and deep field of view through the large transparent windows. The flight deck can also accommodate off duty flight and cabin crew or training crew members with 18.6m² of floor space available on the SkyCat 200 and 83.6m² floor space in the SkyCat 1000.

The dual-channelled optically signalled flight control system is based on fibre-optic technology or “fly-by-light” to send signals to the powered control actuators.

The air cushion landing system is derived from hovercraft technology with hoverskirts installed on the underside of the outer hull section. The hover skirts are held flat against the hull by the air pressure which gives the hull an aerodynamic profile during flight and also allows an all round view from the cabin. The hover skirt and the hull pressure system are operated by the ballonet fans.

The SkyCat 20 is powered by four ATG A-Tech 600 direct injection diesel engines rated at 447kW. The larger SkyCat 200 is equipped with four 5,996kW turboshaft engines. The engines are installed in ducts with two engines on the forward hull and two engines on the rear hull. Blown vanes in the ducts provide the vector thrust for take-off, and landing and for manoeuvring on the ground.