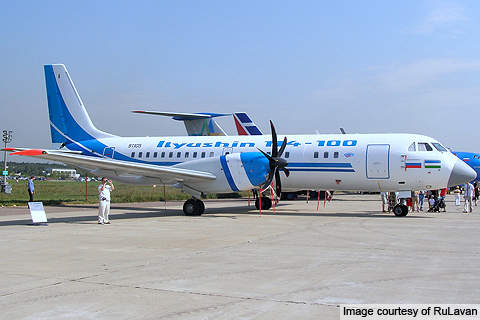 The IL-114 is a mid-range passenger jetliner designed and manufactured by Ilyushin Aviation Complex.

The aircraft is made up of advance composite metal alloys, including titanium, to reduce its overall weight. 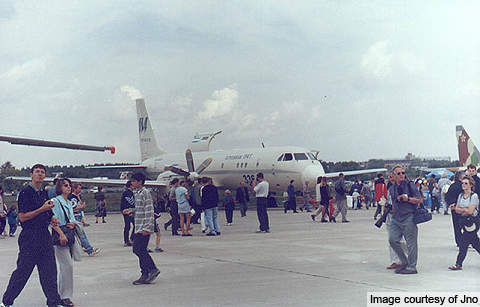 The IL-114 is a mid-range passenger jetliner designed and manufactured by Ilyushin Aviation Complex (IAC) of Russia. It was built to supersede the aging fleet of IL-14 and An-24 airliners deployed within Russia. 14 IL-114s are currently operational worldwide.

The IL-114T is a freight transport model built for Uzbekistan Airways. It is fitted with a 3.31m long and 1.78m wide cargo door at the rear fuselage and a removable roller floor.

The IL-114M is a maritime patrol version fitted with TV7M117 turboprop engines.

“The Ilyushin
IL-114T is a freight transport model built for Uzbekistan Airways.”

The IL-114PR is a defence version built to carry out signal intelligence (SIGINT) and airborne early warning (AEW) operations. IL-140M is a naval variant built to accomplish ecological monitoring, maritime patrolling and search and rescue missions.

The IL-114-300 is an improved version which increases fuel efficiency and minimises noise levels.

Venezuela signed an agreement with IAC during the 2007 MAKS Airshow to procure 98 IL-114s, but the deal was cancelled.

The IL-114 is based on a free lift monoplane design. The aircraft is made up of advance composite metal alloys, including titanium, to reduce its overall weight. It was designed to take-off and land from unpaved airfields or short runways even in bad climatic conditions.

The development of IL-114 began in 1980s. The maiden flight of the aircraft took place in March 1990. Production commenced in 1992. Four prototypes were built with an aim to achieve certification in 1993. The test programme was however delayed when one of the prototypes undergoing flight trails crashed in July 1993 due to a technical error in the engines or propellers. A cargo version, the IL-114T, also met with an accident in 1999 during flight testing.

The displays enable the pilot to analyse and prevent the failures caused in engines, electric supply systems, air conditioning, the antifreeze system, air pressure in the cabins, landing gear position, doors and other systems.

The 18.9m-long and 2.64m-wide cabin of the IL-114 accommodates 64 passengers in a two seating configuration. The height of the cabin is 1.92m. The ergonomically designed cabin is equipped with a baggage compartment, air conditioning system and digital engine control systems. Overhead panels are also incorporated to provide blurred light which creates a comfortable atmosphere for the passengers on-board.

“The IL-114 is based on a free lift monoplane design.”

The IL-114 is powered by two TV7-117S turboprop engines rated at 1,900kW each. The engine is driven by a six-bladed SV-34 propeller supplied by Aerosila. Produced by Klimov Corporation, the TV7-117S consumes 500kg to 550kg of fuel an hour. The TV7-117S engine maximises fuel efficiency and reduces noise levels and gas emissions.

The length and diameter of the engines are 2.1m and 0.94m respectively. The dry weight is 530kg.

The IL-114 is fitted with a conventional tricycle type landing gear. The retractable wheels are incorporated with a telescopic shock-absorption system which renders stability to the aircraft while landing on synthetic or unpaved runways.