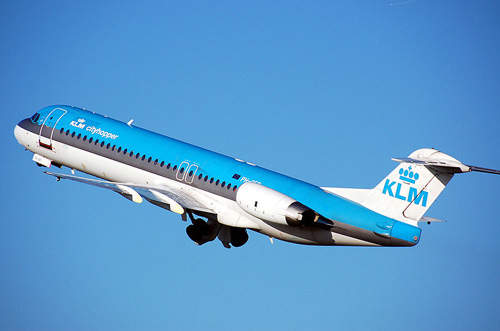 Fokker 100 is a medium-sized aircraft developed and manufactured by the Fokker company. 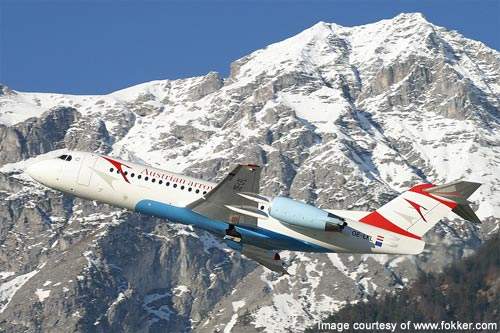 The first Fokker 100 was delivered to its launching customer, SwissAir, in February 1988. 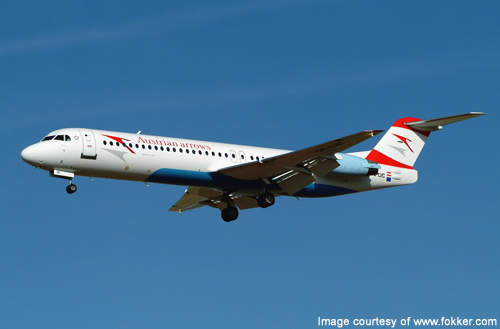 Suppliers of the aircraft set up the Fokker 100 programme to provide after-sales service to customers.

Fokker 100 is a medium-sized aircraft developed and manufactured by the Fokker company. Introduced in the 1980s, the aircraft has low operational costs and no competition and was a best-seller in the 100 seat category.

In 1983 the design of the Fokker 100 was announced as an extended replacement of the Fokker F28. The United States Federal Aviation Administration certified the aircraft as Fokker 28-0100, even though many parts of the two designs were similar.

The airline crisis in the 1990s and competition from the Bombardier CRJ200 and Embraer ERJ 145 adversely affected Fokker 100 sales and the company became insolvent in 1996. Production was wound up in 1997. In total 278 aircraft were manufactured. As of 2009, 30 airlines were operating 229 Fokker aircraft.

Companies such as Bombardier and Rekkof Restart tried to purchase and restart production of the aircraft, but negotiations failed. Suppliers of the aircraft set up the Fokker 100 programme to provide after-sales service to customers.

In February 2009, as a part of the programme, Stork Aerospace, the parent company of Fokker Services, entered into a manufacturing licence and forging supply agreement with Messier-Dowty for the replacement of the Fokker 100’s landing gear.

Messier-Dowty signed a contract with Heroux-Devtek to manufacture and supply replacement components. Deliveries will begin in 2010 and end in 2012. The value of the contract is estimated to be $11m to $17.7m.

An extended range version of the Fokker 100 with additional fuel tanks was introduced in 1993. In 1994 a passenger / freight version, the Fokker 100QC, was launched.

“The Fokker 100 is equipped with a flight management system and an integrated automatic flight control system.”

A shorter version of the F-28, a new variant Fokker 70, was introduced in 1993 with seating for 80 and a reduced fuselage.

In 1994 and 1997 a shorter version of the Fokker 100, the Fokker 70 five-abreast regional aircraft, was launched. A total of 47 aircraft were manufactured during this period. Eight airlines operate the aircraft.

The Fokker 100 has two cabin configurations. One is the 109-seater economy class layout with five seats in a row and the other is the business class layout with four seats in a row. A typical cabin layout has 107 seats at 32in pitch. The aircraft has upper deck compartments toward both sides of the entry door offering higher payload capacity. It also has a forward-opening passenger door or a downward-opening door with integrated stairs.

The Fokker 100 is equipped with a flight management system and an integrated automatic flight control system in its glass cockpit. The systems enable CAT IIIA autoland and offer full flight envelope protection. CAT IIIB with roll-out guidance is also available. Other flight deck systems including BRNAV, EGPWS, RVSM, 8.33kHz / NAV and COM FM-immunity and TCAS II are all certified on the aircraft.