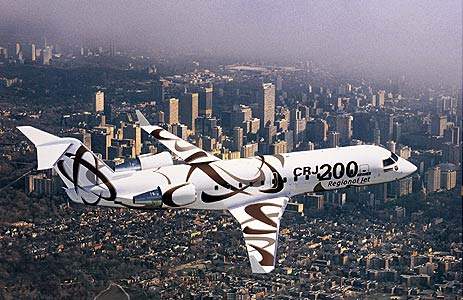 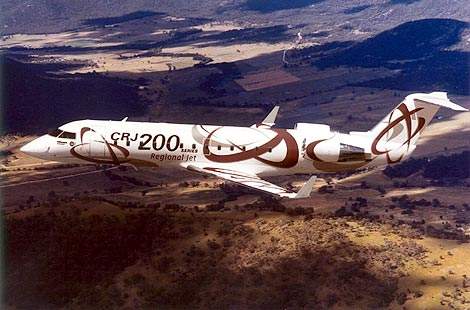 The main cabin is nearly 15m in length and can seat up to 52 passengers. 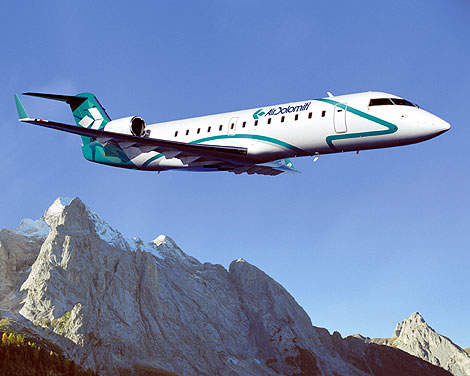 CRJ200LR in the fleet of Air Dolomiti of Northern Italy. 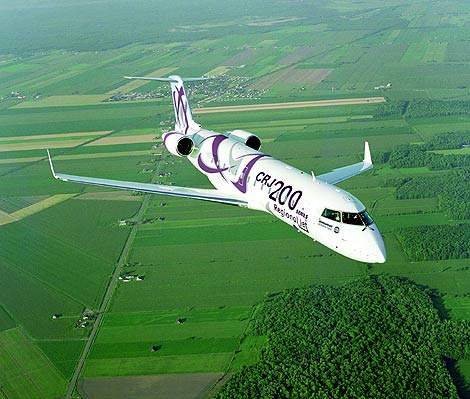 The CRJ200 is available in extended range (ER) and longer range (LR) versions. 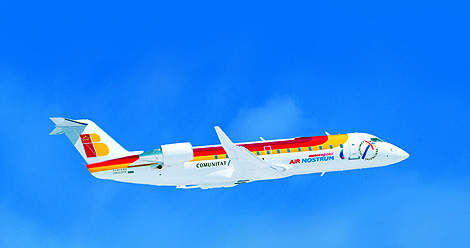 Air Nostrum of Valencia, Spain, has a fleet of 32 CRJ200ER aircraft. 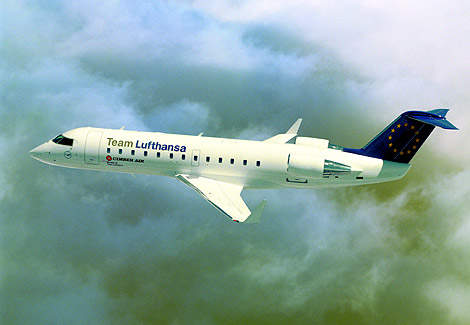 CRJ200ER operated by Cimber Air, a member of Team Lufthansa. 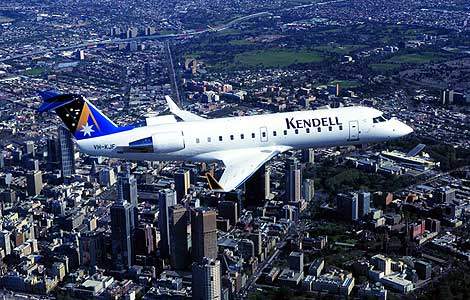 CRJ200ER in the fleet of Kendell Airlines of New South Wales, Australia. 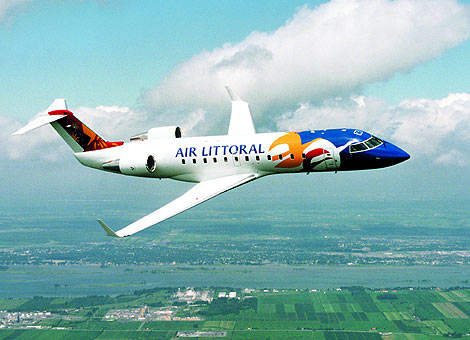 CRJ100ER in service with Air Littoral of Montpelier, France.

The 50-seat Canadair Regional Jet 200 series was announced by Bombardier in 1995 and introduced into service in 1996. The CRJ200 replaced the first member of the family, CRJ100, which entered service in 1992. 709 CRJ200 regional passenger jets had been produced and delivered when production of the airliner was completed in January 2006. The CRJ200 continues to be manufactured as the airframe for the Challenger 850 corporate shuttle and executive jet.

The B variant, carrying the designations CRJ200B, CRJ200B ER and CRJ200B LR is fitted with CF34-3B1 engines for operation in hot and high conditions.

Bombardier, with Eaton Aerospace, has certificated a redesigned flap actuator system for the CRJ200, to improve performance in cold weather. Retrofit of the flap upgrade began in August 2008.

The German Operating Aircraft Leasing (GOAL) signed an agreement with AviaAM Leasing in July to supply eight CRJ200 aircraft. The first CRJ 200 will be delivered in 2011 for lease to clients in Russian and CIS.

Delta Connection of the US, through its carriers Atlantic Southeast Airlines (ASA), Comair and SkyWest Airlines, operates the largest fleet of CRJ200 jets with over 230 aircraft ordered and delivered, and Lufthansa CityLine of Germany is the largest European operator with 65 aircraft. Other operators include Air Wisconsin (70 aircraft), Air Canada (15), Atlantic Coast Airlines, Air Nostrum (32), Horizon Air, Mesa Air and Northwest Airlink (45).

In August 2006, Bombardier launched the CRJ200 PF (Package Freighter), with the announcement that West Air Europe of Sweden had signed a contract for the conversion of two CRJ200 to the freighter configuration.

“The design of the CRJ200, which evolved from the Challenger 604 business jet, is for regional airline operations.”

The communications system is a dual VHF navigation and communications radio. HF and VHF radios and selective calling are optional communications. The windscreen and cockpit side windows are fitted with electric de-icing systems.

The design of the CRJ200, which evolved from the Challenger 604 business jet, is for regional airline operations. The aircraft is equipped with high-efficiency engines giving a range up to 3,050km. The wings are transonic and are fitted with winglets for efficient high-speed flight.

The fuselage is of semi-monocoque design. The main cabin is nearly 15m in length with a centre-line width of 2.57m and can seat between 15 and 52 passengers.

Two General Electric high efficiency CF34-8C1 turbofan engines provide 56.4kN thrust at take-off and 61.3kN thrust with auto power reserve. The engines are equipped with pneumatically operated
thrust reversers. The engine nacelles mounted on the sides of the rear section of the fuselage are developed and supplied by Bombardier Aerospace (Shorts Brothers) of Belfast.

“The CRJ200 is equipped with high-efficiency engines giving a range up to 3,050km.”

The Regional Aircraft division of Bombardier Aerospace, based in Toronto, Ontario, is responsible for marketing, sales, contracts and product support of the CRJ Series jet airliners.

The company’s training facilities include the Bombardier Aerospace Training Centre in Montreal and a facility in Berlin, Germany operated under agreement between Lufthansa, CAE and Bombardier
Aerospace.