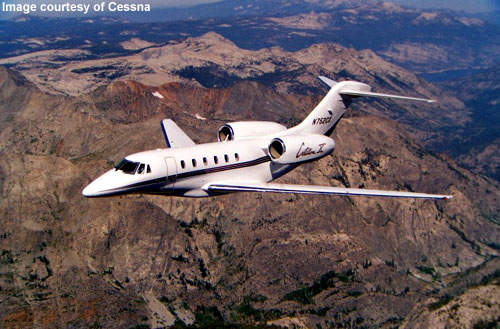 The Citation X is currently the fastest civilian aircraft, with an ability to cruise just under the sound barrier at Mach .92. 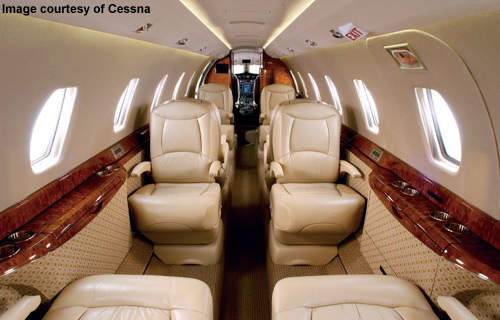 In its typical configuration the Citation X carries up to eight passengers and two pilots. 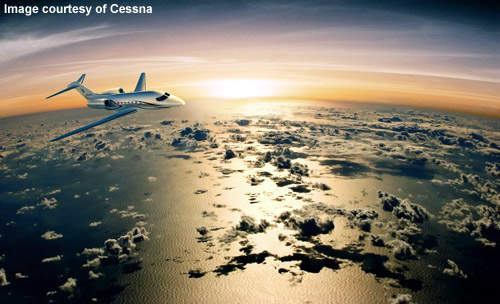 The Cessna Columbus is still a work in progress for Cessna and will be the largest Citation to date. 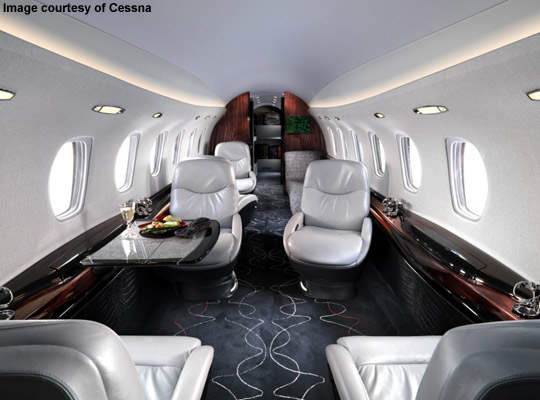 The passenger cabin is large on the new Columbus, measuring 8.31m long, it is still likely to carry up to eight passengers.

The company expects that the Columbus will be the only aircraft in its class capable of flying 7,408km non-stop.

Cessna (a Textron company) says that the Citation X (also known as the model 750) is currently the fastest civilian aircraft, with an ability to cruise just under the sound barrier at Mach 0.92. Part of the Cessna family of Citation business jets, the Citation X is based upon the Citation III, IV and VII models but notably features new wings, twin Rolls-Royce AE3007C1 engines and a glass cockpit featuring Honeywell Primus 2000 avionics; in 2003 the aircraft was upgraded with new interior enhancements.

The development of the Citation X began in 1990; the first prototype was rolled out in 1993 closely followed by the first production aircraft roll out in 1994. The Citation X achieved FAA certification in May 1996 and the first aircraft was delivered the same year to golfer Arnold Palmer. In its typical configuration the aircraft carries up to eight passengers and two pilots.

The company also said that up to the end of 2007 279 Citation Xs were delivered. In 2005 the aircraft achieved the milestone of 250 deliveries and by August 2007 Citation Xs had logged up a total of one million flight hours. Cessna delivered its 300th Citation X to Jetalliance in November 2009.

Cessna delivered its first Citation X with elliptical winglets fitted by the Winglet Technology, in September 2009 to an unnamed customer. It achieved the Supplemental type Certificate (STC) by FAA in June 2009. These additional winglets increase the cruise speed by 28km/h and the payload by 1200lb.

The European Aviation Safety Agency (EASA) sanctioned the Supplemental type certificate to Cessna Citation X , allowing it to attach the modified winglets in May 2010.

In June 2010, Cessna announced that from 2011 the Citation X will feature new Honeywell Primus avionics platform and an improved cabin management system.

It announced that the program might be restarted if the economic conditions improved. The company had expected the Columbus to be the only aircraft in its class capable of flying 7,408km non-stop. “It [the Columbus] will offer non-stop range from Dubai to London, the largest cabin in its class, and ample space for luggage,” Cessna vice president, international sales, Trevor Esling had said.

Cessna had expected the Columbus, to achieve full certification by 2013 and commence deliveries by 2014. The Columbus is expected to have a maximum cruise speed of 904km/h (Mach 0.85) derived from its two Pratt & Whitney PW810 engines, cited by Cessna as being fuel efficient and the most environmentally friendly in their class. Even though the passenger cabin is large on the new Columbus, measuring 8.31m long, it is still likely to carry up to eight passengers, even though it should be capable of seating ten, and two pilots in its typical configuration.

“The Citation X is based upon the Citation III, IV and VII models but notably features new wings.”

Prior to the worsening global recession, Cessna said in November 2008 at the 2008 Middle East Business Aviation show (MEBA) in Dubai that around 10% of orders for the Columbus have come from the Middle East; Cessna says that it has around 70 orders at approximately $27m each for the Columbus thus far.

The Columbus represents an investment of approximately $780m for Cessna and, in October 2008, part of this investment was opened in the form of the start of construction of a new 600,000ft² Columbus facility in Wichita, Kansas.

Cessna announced in July 2009 that $10m would be returned back to the Wichita City and the Sedwick County . This money was given to Cessna as an incentive for developing the aircraft in Wichita.

"The hard work of employees past and present has made it possible for us to launch a programme as massive as the Citation Columbus," said Cessna chairman, president and CEO Jack J Pelton, "Despite the uncertainty of the short-term economic environment, we believe it is critical that we not compromise our future."