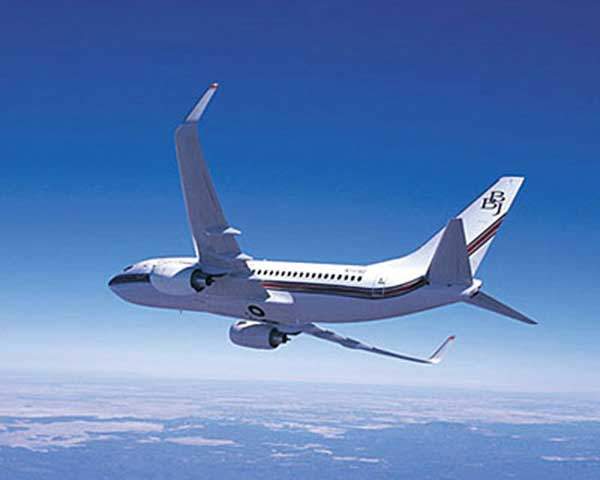 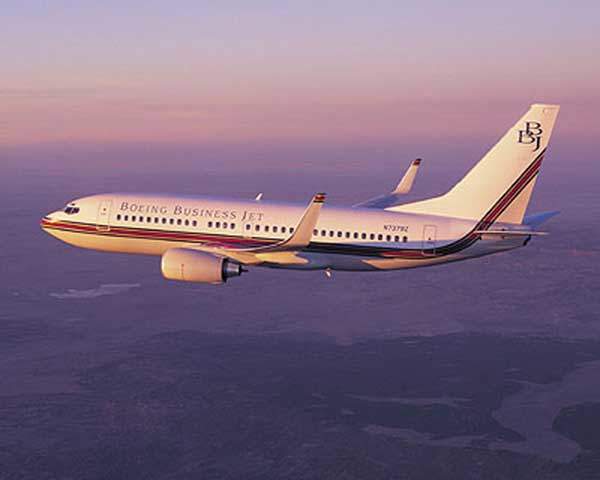 The BBJ is a member of the successful 737 family of airliners. 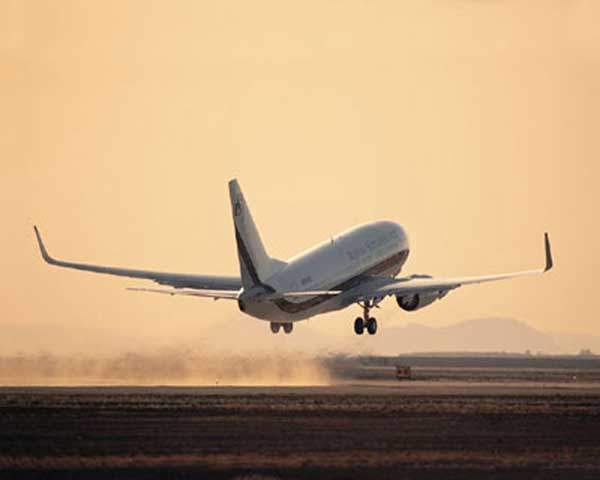 BBJ taking off, showing the optional winglets which provide increased range through a reduction in air turbulence. 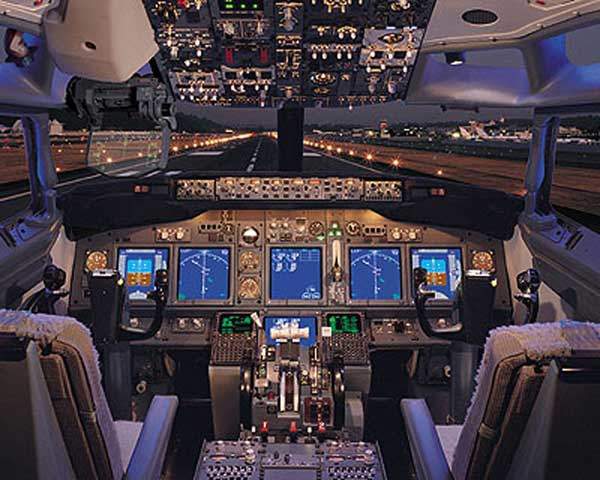 The Boeing Business Jet (BBJ) glass cockpit is based on that of the Boeing 777. 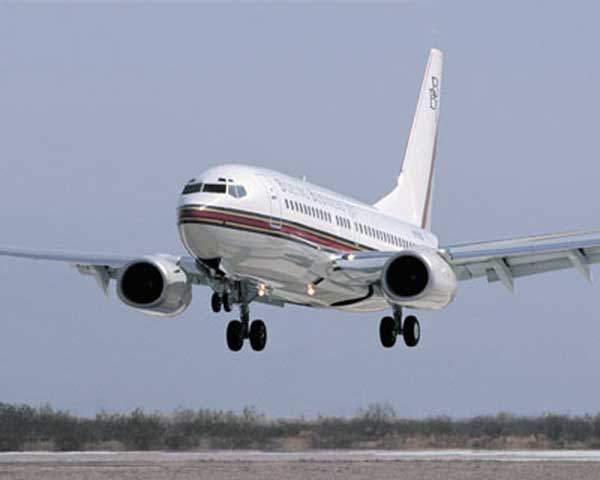 The Boeing Business Jet (BBJ) coming in to land. 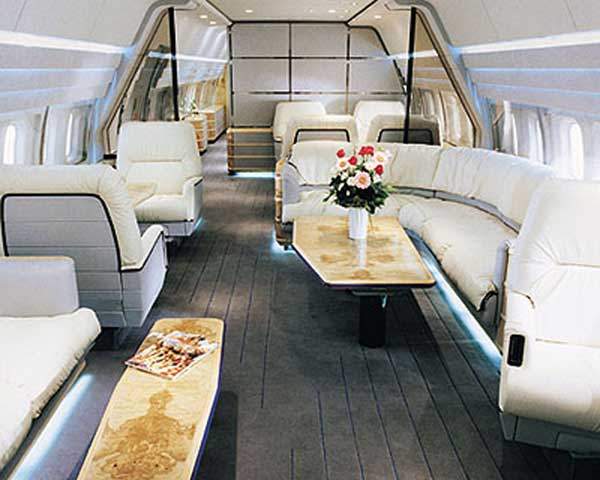 The Boeing Business Jet's spacious cabin can be customised to meet individual or business requirements.

The Boeing business jet or BBJ is a member of the 737 family of airliners, one of the most successful and reliable business jet aircraft in the world.

The BBJ engineering and operations are based on the safety and reliability of the 737 aircraft, which logs more than 14,000 take-offs every day (one take-off every six seconds) and completed more than 100 million flight hours. The BBJ completed maiden flight in September 1998 and entered service in 1999.

The delivery of the first BBJ was in October 1998 and as of July 2011 nearly 154 aircraft were ordered (including BBJ, BBJ2, BBJ3 and BBJ C), with more than 138 BBJ’s delivered worldwide. The BBJ accumulated more than 90,000 flight hours.

Two BBJs are in service with the Royal Australian Air Force, one with the government of South Africa and three with the Abu Dhabi Amiri Flight. In July 2005, one BBJ of the US Air Force was delivered to the Columbian Government for presidential and VIP transport.

"The BBJ can fly more than 6,000nm non-stop, for example from Johannesburg to London or Los Angeles to Paris."

It has a maximum range of 10,140km. BBJ3 was officially launched in October 2006, with orders from two undisclosed customers. Certifications from the Federal Aviation Administration (FAA) and European Aviation Safety Agency (EASA) were received in April 2007 and April 2008 respectively. Work on the first BBJ3 began in May 2008 and was completed in August 2008. Four BBJ3s were delivered until 2010.

The BBJ can fly more than 6,000nm non-stop, for example from Johannesburg to London or Los Angeles to Paris, and provides interior space nearly three times larger than other comparable long range executive jets. In April, 2002, a BBJ flew a record 6,854nm from Seattle, USA to Jeddah, Saudi Arabia at an average cruise speed of Mach 0.78.

The spacious 807ft² cabin can be customised to meet individual or business requirements for eight to 149 passengers. The interior configuration installed by completion centres with interior designers can include an executive office, conference rooms, private offices and bedrooms. Personal environments can be created for example with a living room, dining room, two bedrooms and two bathrooms.

Fresh air is constantly circulated throughout the cabin. There are two temperature control zones for the passengers and crew.

The BBJ is self-sufficient at airports with reduced ground support and limited facilities. The aircraft has built-in airstairs and easily loaded cargo holds.

Boeing Commercial Airplanes with headquarters in Seattle, Washington, provides the aircraft to Boeing business jets, which delivers them in a green configuration (no paint or interior) to the completion centre selected by the customer for interior installation and painting.

The design of the fuselage is based on that of the proven, Classic 737-700 combined with the centre section, strengthened aft section, wings and landing gear of the 737-800.

Optional winglets from Aviation Partners Inc yield a typically 5% increase in range through an up to 7% reduction in the turbulence-induced drag at the wingtips.

"The Boeing business jet or BBJ is a member of the 737 family of airliners, one of the most successful and reliable business jet aircraft in the world. The BBJ engineering and operations are based on the safety and reliability of the 737 aircraft."

The avionics is based on the Rockwell Collins Series 90 avionics suite with a dual automatic direction finding (ADF), TCAS II traffic alert and collision avoidance system and a predictive windshear unit.

The enhanced ground proximity warning system (EGPWS) is supplied by Honeywell (formerly AlliedSignal) and the airborne navigation data recorder, the digital flight data acquisition unit and a quick access recorder are supplied by Teledyne. The Honeywell / Thales MCS-7000 satellite communication system is certificated for the BBJ.

In January 2007, Boeing and Rockwell Collins announced the development of an enhanced vision system (EVS) for the BBJ.

The EVS features multiwavelength infrared sensors from Max-Viz and is displayed on the HGS-4000 HUD. FAA Certification of the EVS on BBJ and Air National Guard C-40 was completed in October 2010.

The aircraft has two CFM International CFM56-7 turbofan engines, each providing 117.4kN. The wing tanks hold 26,025l of fuel, and optionally from three to nine auxiliary fuel tanks (belly tanks) can be installed providing a total of up to 40,480l of fuel.

The BBJ is certified and capable of 180mins extended-range, twin-engine operations (ETOPS) providing access to more direct and shorter routes.

There are three service centres in Europe (Lufthansa Technik in Hamburg, Germany; and Jet Aviation in Basel and Geneva, Switzerland), two in the United States (Associated Air in Dallas, Texas and DeCrane Aircraft Systems Integration Group in Georgetown, Del) and one in the Middle East (Alsalam Aircraft Company of Riyadh, Saudi Arabia) for authorised service and warranty work.