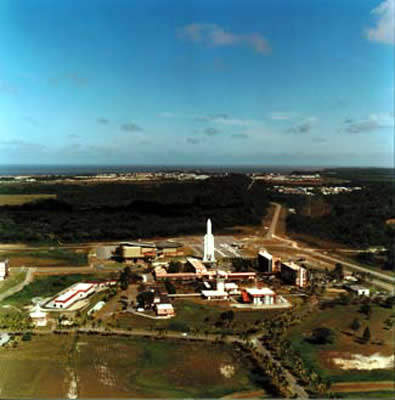 The Artemis satellite was launched from the European Space Agency (ESA) base at Kourou on 12 July 2001.

The Artemis satellite is designed to test new technologies. 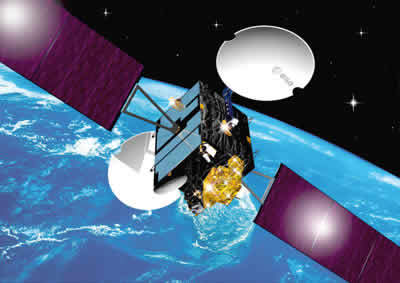 Artemis, an artist's impression. Artemis carrys three payloads plus a number of experiments. 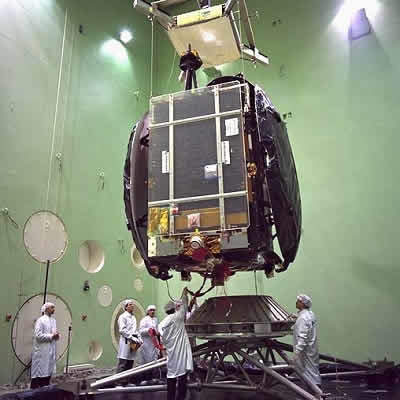 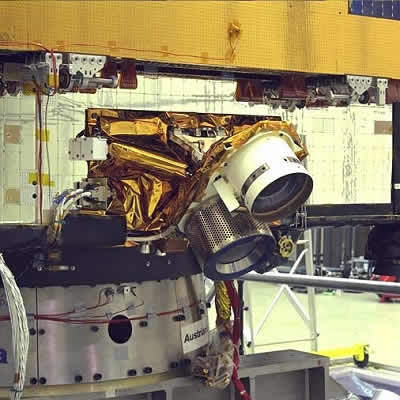 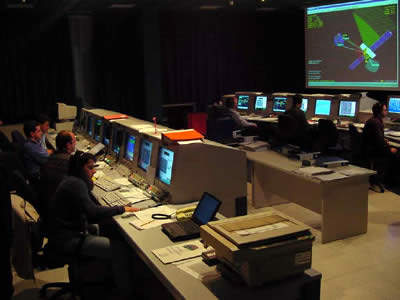 The operation control centre is in Fucino, Italy.

The Artemis satellite was launched on an Ariane 5 rocket on 12 July 2001 from Kourou, French Guiana in South America. The 3,100kg telecommunications satellite is operated by the Altel consortium which is made up of Alenia Spazio-Telespazio and the European Space Agency (ESA). Other companies involved in the project are Alcatel Espace, Astrium, Austrian Aerospace, Bosch Telecom, Casa, Fiar, Fiat Avio, Fokker, Laben, Saft and Top-Rel. A malfunction caused Artemis to be set into a non-geostationary orbit after its launch. The operations team and systems engineers have successfully completed the first two stages of the four stage recovery strategy. The satellite itself is functioning correctly and is fully under control.

SITUATION OF THE ARTEMIS SATELLITE

To set the satellite into the correct orbit, a four stage strategy has been adopted. Under stage 1, the chemical propulsion apogee boost motor was fired during five perigee passes from 18 to 20 July to increase the apogee to about 31,000km, without significant changes to the perigee.

In stage 2, three consecutive motor burns from 22 to 24 July circularised the elliptical orbit. This achieved a circular parking orbit of 31,000km, an orbit duration of about 20 hours and an inclination of 0.8°. The solar arrays and the two antenna reflectors were then fully deployed.

STRATEGY FOR THE ARTEMIS SATELLITE AND THE ELECTRICAL ION PROPULSION

The innovative ion propulsion system, which was originally intended to be used only for controlling inclination of the satellite, will now be used in a new mode to raise the orbit. Stage 3 consists of patching and commissioning this control mode by uploading software, after which the ion engines will be checked out.

Stage 4 will use this new electrical ion propulsion functionality starting in late December 2001 for several months during which time Artemis will be ‘spiralled’ from parking to nominal geostationary orbit.

A meaningful technology mission in geostationary orbit should be possible with the on-board supply of propellant remaining after orbit raising, assuming the operations in new modes, both in parking orbit and during ion-engine orbit-raising manoeuvres, are successful.

It is designed for three specific functions: for voice and data communications between mobile terminals, mainly for cars, trucks, trains or boats; for broadcasting accurate navigation information as an element of Europe’s Egnos; and for sending high data communications directly between satellites.

The satellite is 4.8m high, 25m long (solar array tip to tip) and 8m wide (with antennas deployed). Its power consumption is 2.5kW. It will cover Europe to the Urals, North Africa and the Middle East with a coverage of 65% per orbit and a lifespan of 10 years.

The 44kg of xenon propellant for the ion propulsion system had been loaded by 15 June, but installing the remaining 1,519kg of fuel was carried out at the last opportunity as this is the most hazardous pre-launch tasks. This was done in a dedicated building using blast shields with traffic being kept away from the area. A problem during fuelling required the tank to be emptied of the hydrazine fuel and refilled, but this was carried out without jeopardising the launch date.

After fuelling, Artemis was mated to the SYLDA adaptor, a ring that is bolted and clamped to the Ariane 5 launcher. The satellite then had a framework built around the satellite to attach the spacecraft’s protective fairing. On 5 July, radio links between Artemis and the ground support equipment on the launch table were checked and validated. On 6 July it was joined to the launcher and it was taken to the launch pad five days later.