Height to Top of Tail Fin 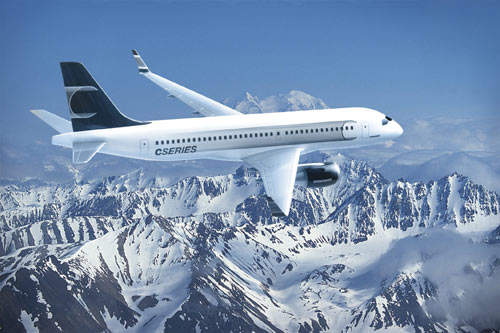 Bombardier's CSeries is a family of aircraft designed for the 110 to 130-seat market. 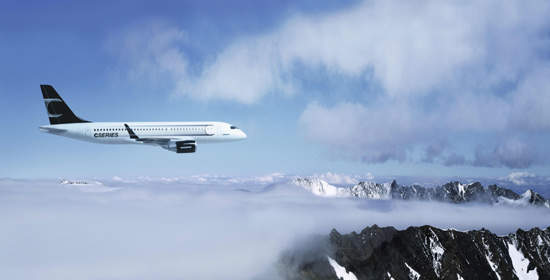 The CS100 and CS300 are available in standard and extended-range configurations. The extended-range version has a transcontinental range up to 3,000nm. 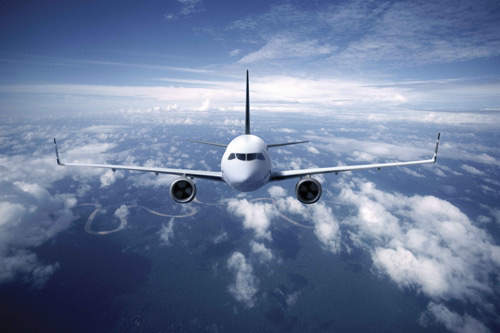 About 20% of the aircraft by weight will be of composite construction and it features a fourth generation transonic wing design. 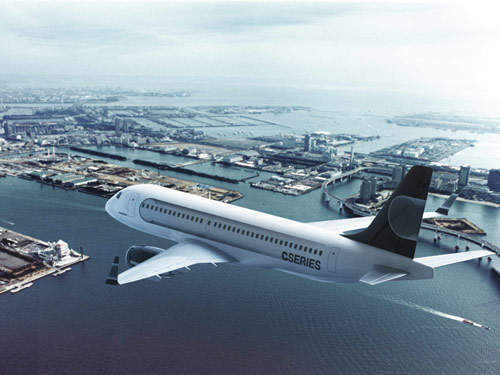 The flight deck is equipped with both fly-by-wire and conventional side stick controls. 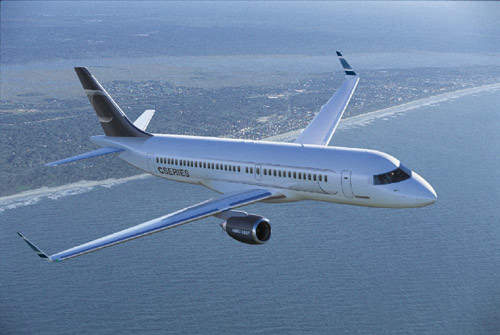 The CS100 and CS300 will have the same engines and a high level of commonality in crew training and maintenance. 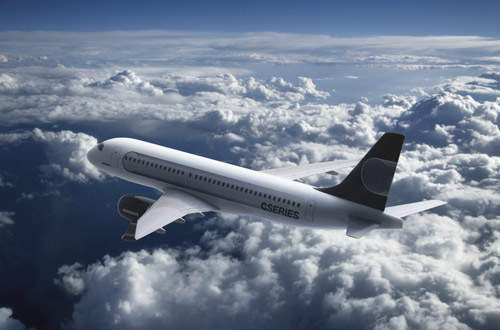 The CSeries family of aircraft is expected to enter into service in 2013. 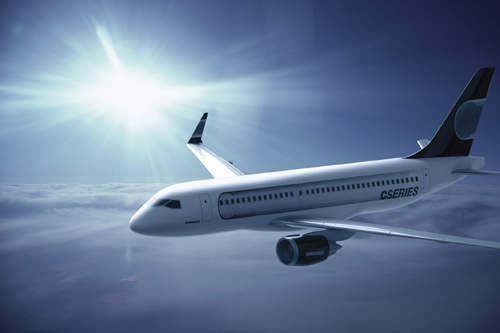 Final assembly of the CSeries will be carried out in Quebec, Canada, with the wings, nacelles and empennage produced in Belfast, Northern Ireland. 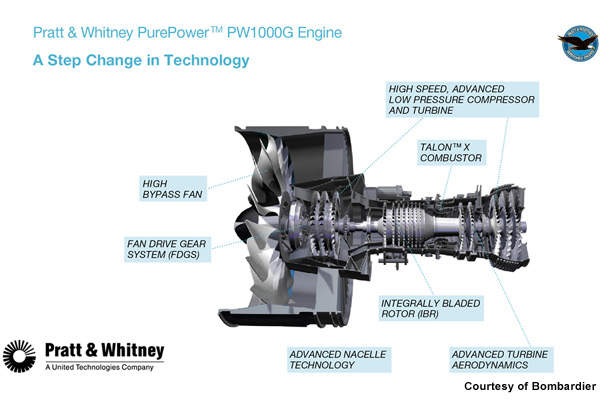 The CS100 and CS300 are available in standard and extended range configurations. The standard configuration, for short haul flights on typical airport high frequency “hub-and-spoke” routes, has a range of up to 2,200nm. The extended range version for point-to-point and transcontinental flights provides ranges up to 2,950nm.

In March 2004, Bombardier began an evaluation programme to examine the feasibility of a new-generation of commercial aircraft. The concept definition phase of the development programme for the CSeries began in 2004 and continued until 2006.

By March 2005, Bombardier began to offer the new aircraft to customers. The CSeries aircraft programme moved to the joint definition phase (JDP) from the joint conceptual definition phase (JCDP). In January 2006, Bombardier declared that it would drop plans to develop the CSeries aircraft as it failed to secure significant orders. A year later, in January 2007, the company restarted the work to develop the CSeries aircraft. A joint development programme involving selected contractors was underway in 2006, leading to the detailed design phase starting in 2007. Engine certification was completed in 2008.

In July 2008, the Bombardier board of directors approved the launch of the CSeries family of aircraft, which is expected to enter into service in 2013. The company also finalised the Mirabel facility (Quebec) as the final assembly location for CSeries aircraft, Saint-Laurent facility (Quebec) to manufacture aircraft aft fuselage and cockpit, and the Belfast facility (Northern Ireland) to design and manufacture CSeries aircraft wings.

“Bombardier’s CSeries aircraft is a family of aircraft specifically designed for the 110 to 130-seat market.”

On 15 September 2009, the ground-breaking ceremony at the first facility of CSeries aricraft was celebrated at Mirabel. This testing and systems-proving facility will be a complete integrated aircraft systems test area (CIASTA) that will house a virtual CSeries test aircraft. Reliability and functionality of the aircraft systems will be tested at the facility a year before the prototype aircraft flies.

In June 2009, 17 suppliers were selected to contribute to the manufacture of the CSeries aircraft.

Bombardier received the first test article, a fuselage test barrel, at its Saint-Laurent facility in August 2009.

The test barrel is the representative of the main fuselage section of the upcoming CSeries aircraft. It will be used to demonstrate the manufacturing and engineering structural concepts before the aircraft goes in for the final design phase in 2010.

The governments of Canada, Quebec and the UK are providing investment funding of $700m. Canada and Quebec will invest $262.5m and $87.5m. The UK Department of Trade and Industry (DTI) and Invest Northern Ireland (INR) are providing a £180m investment in the project. The DTI’s contribution of £125m is a repayable launch investment.

CS100 and CS300 orders and deliveries

In 2008, the launch customer of the CSeries family, Lufthansa, signed a letter of interest (LoI) for 60 aircraft (each costing $46.7m) including 30 options. On 11 March 2009, Bombardier received a firm order worth $1.53bn from Lufthansa for 30 aircraft which would be operated by Lufthansa’s subsidiary Swiss International Air Lines Ltd.

On 30 March 2009, Bombardier Aerospace and Lease Corporation International Aviation (New Buildings) Limited (LCI) signed a contract for three CS100s and 17 CS300 jetliners and options for 20 CSeries aircraft. LCI has become the launch customer of the CS300 aircraft. The contract was worth $1.44bn.

About 20% of the aircraft by weight will be of composite construction. Composite materials are used in the centre and rear sections of the fuselage, the tail cone, empennage and wings. The aircraft features a fourth-generation transonic wing design.

The CSeries incorporates a high level of electrical systems and control that contribute to a low operating weight and improved operating costs. The CS100 and CS300 aircraft have the same engine and a high level of commonality in crew training, operating procedures, and parts and maintenance procedures.

Passenger doors are installed on both sides at the fore and aft of the cabin. The cabin is laid out for fast and easy access requiring minimum turnaround time at the airport.

The overhead compartments provide carry-on baggage space of 2.6ft³ per passenger. The layout gives each row of seats at least one 11in×16in window.

The cargo compartment of the CS100 provides a usable volume of 830ft³.

The aircraft has good short-field landing capability in all weather conditions. It has retractable tricycle-type landing gear: the main units retract inward and the nose unit retracts rearward. Each unit is twin-wheeled.

It would run on two Pratt & Whitney PurePower PW1000G engines. The PurePower technology reduces fuel consumption, noise and emissions. They generate a thrust of 17,000lb-23,000lb.