The wide-body aircraft category has suffered a major impact of the COVID-19 pandemic, as air travel demand declined.

Verdict has conducted a poll to assess how long it will take for the sales of wide-body aircraft to return to 2019 levels.

Analysis of the poll results shows that wide-body aircraft sales are expected to take two years or more to return to 2019 levels. 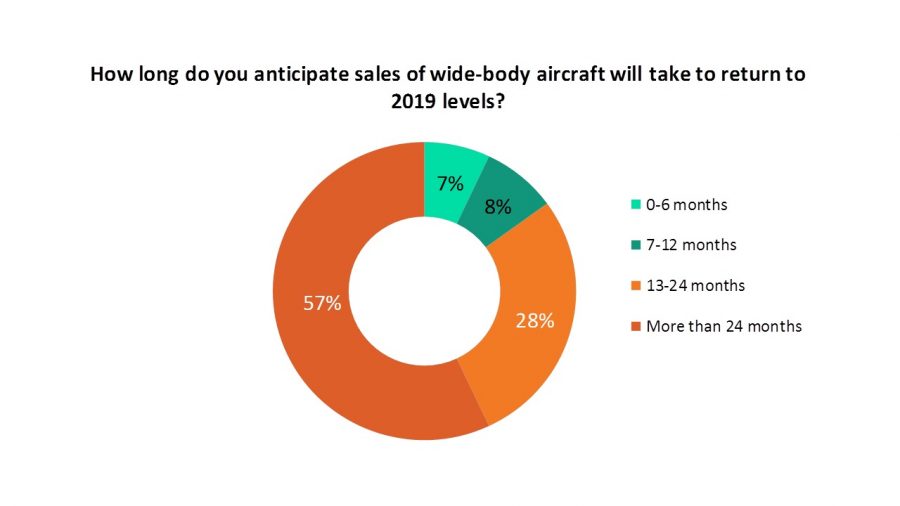 The sales will take between seven and 12 months to return to 2019 levels, according to 8% of the respondents, while a minority 7% opined that the same will take at least six months.

The analysis is based on 109 responses received from readers of Aerospace Technology, a Verdict network site, between 08 July and 29 September 2020.

Wide-body aircraft is majorly used in long-haul travel, which is yet to recover from the impact of the COVID-19 pandemic. Although short to medium-haul travel has returned in certain regions, demand for long-haul travel is expected to remain low in the near to medium-term, according to Fitch Ratings.

The International Civil Aviation Organization (ICAO) has announced new guidelines for air transport safety and hygiene, which impact the wide-body aircraft. The ICAO’s Council Aviation Recovery Task Force (CART) recommended in its new report that airlines and airports need to ensure hygiene and social distancing in their operations.

The report noted that airlines will need to alter their seat assignment process to ensure physical distancing between passengers. Passenger density in twin-aisles aircraft such as the A350 or the B787 will, therefore, become unsustainable forcing airlines to ground wide-body aircraft in the post COVID-19 air travel operations, says GlobalData.

Aircraft manufacturers are recognising the changes the air travel industry is undergoing and taking necessary steps to handle the impact. Boeing has announced plans to stop production of its 747 aircraft after several airlines announced their plans to retire its 747 fleet. The aircraft was already facing competition from more efficient twin-engine aircraft.

Further, Airbus has chosen to modify its A330 and A350 family aircraft to be capable of cargo operations. The modification enables freight pallets to be installed onto the seat tracks after detaching the seats.