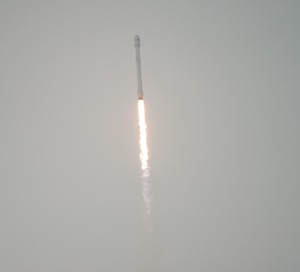 SpaceX has failed again in its attempt to execute a successful ocean landing of the company’s flagship rocket on a drone platform in the Pacific Ocean.

However, SpaceX’s Falcon 9 rocket successfully launched on Jason-3 satellite into low-Earth orbit from the launch pad of Vandenberg Air Force Base in California.

Following lift-off, the rocket successfully headed back to its destination in the Pacific Ocean. After touching the floating landing pad, one of its landing legs broke and made the rocket stumble onto the surface of the drone ship.

It was SpaceX’s third attempt to perform an ocean landing of Falcon 9, while the previous two exploded during a similar manoeuvre.

While giving reasons behind the fallout of Falcon 9 during landing, SpaceX owner Elon Musk said a simple mechanical failure might cause the accident, reports Wall Street Journal.

"SpaceX is continuing to attempt ocean landings as it will give the company better flexibility in recovering higher launch velocity rockets."

In a tweet, Musk said ‘touchdown speed was ok’ but the latch on one leg did not fastened properly ‘so it tipped over after landing.’

In December, the company successfully landed its reusable Falcon 9 rocket on solid ground.

SpaceX is continuing to attempt ocean landings as it will give the company better flexibility in recovering higher launch velocity rockets.

The Jason-3 satellite that launched Falcon 9, was developed under a US-European oceanography satellite mission.

The international mission is led by the National Oceanic and Atmospheric Administration (NOAA) along with Nasa, French space agency CNES, and the European Organisation for the Exploitation of Meteorological Satellites.

Nasa Washington associate administrator for science John Grunsfeld said: "Jason-3 is a prime example of how our nation leverages Nasa’s expertise in space and scientific exploration to help address critical global challenges in collaboration with NOAA and our international partners.

"The measurements from Jason-3 will advance our efforts to understand Earth as an integrated system by increasing our knowledge of sea level changes and the ocean’s roles in climate."

The mission is expected to improve weather, climate and ocean forecasts. It will also help NOAA’s national weather service and other global weather and environmental agencies to forecast more accurately about tropical cyclones.