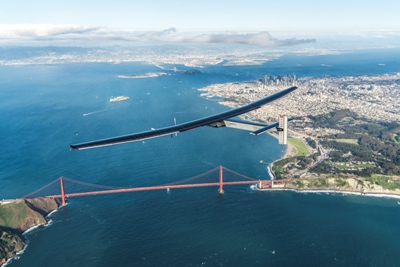 The Solar Impulse 2 (Si2) airplane has completed its three-day, two-night journey across the Pacific Ocean.

Controlled by Bertrand Piccard, the single-seater aircraft took off from Hawaii and landed safely at the Moffett Airfield, California, US, which is the home to Nasa’s Ames Research Centre and Google’s Planetary Ventures.

With 17,248 solar cells built into the wing powering the four batteries of the aircraft, Si2 crossed 4,523km over the Pacific.

During its first part of the journey across the Pacific, Si2 was controlled by André Borschberg in a five-day, five-night flight from Japan to Hawaii last July.

"Solar Impulse is a demonstration of energy efficiency and smart energy management."

Bertrand Piccard began Solar Impulse to promote a pioneering and new spirit, particularly in the fields of renewable energy and clean technologies.

Solar Impulse initiator and chairman Bertrand Piccard said: "Solar Impulse showcases that today exploration is no longer about conquering new territories, because even the moon has already been conquered, but about exploring new ways to have a better quality of life on earth.

"It is more than an airplane: it is a concentration of clean technologies, a genuine flying laboratory, and illustrates that solutions exist today to meet the major challenges facing our society."

The Solar Impulse project has been supported by Solvay, Omega, Schindler, ABB, Google, Altran, Covestro, Swiss Re, Swisscom Moët Hennessy, Masdar and others.

"This is what we may be doing in our communities, our cities and our countries. To have a decentralised renewable energy production, using solar, thermal, wind.