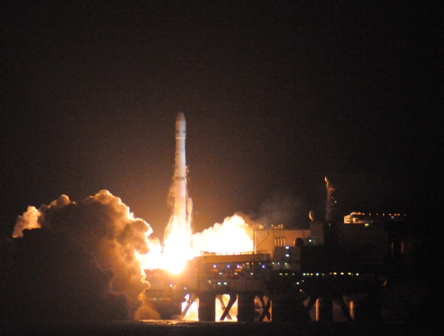 Sea Launch has successfully launched the Intelsat 21 satellite aboard a Zenit 3SL launch vehicle from the Odyssey mobile platform, in the equatorial Pacific Ocean.

Sea Launch president, Kjell Karlsen, said this is the company’s third mission for Intelsat in the past 11 months.

"We look forward to the next Intelsat mission on Sea Launch, scheduled to take place in the first quarter of 2013," Karlsen said.

Following the launch to a final orbital position at 302 degrees East longitude, the Boeing Satellite Systems’ built satellite will replace the existing Intelsat 9 and offer direct-to-home (DTH) and cable services, after the completion of global broadband mobility platform in 2013.

Featuring a Ku-band mobility beam, the satellite is designed to offer 18 years of service to DTH and cable programmers in Latin America, South America, North America and Europe, while its C-band will offer services for North America, the Caribbean, Brazil, Europe and Western Africa.

Intelsat, following the completion of the fourth of five launches planned for 2012, is also planning to launch Intelsat 23 in late 2012, from Baikonur Cosmodrome in Kazakhstan.