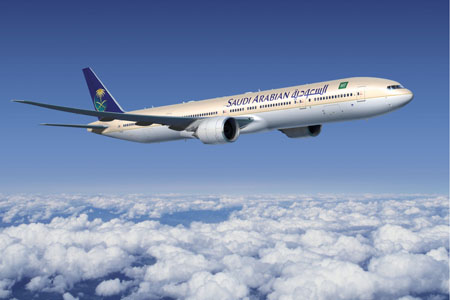 The deal for the eight 777-300ERs (extended range) planes was included in Boeing’s 2011 order for an "unidentified customer", which has now been disclosed. Saudi Arabian Airlines director general Khaled Al-Mulhim said the new order reiterates the company’s confidence in the 777, which has justifiably earned a reputation for improved fuel efficiency, reliability and passenger comfort.

"With the ongoing growth of business and industry in Saudi Arabia, demand in domestic, regional and international travel is also increasing rapidly and the 777-300ER will play a significant role in our long-term strategy growth to expand and modernise our fleet with newer, more fuel-efficient airplanes," Al-Mulhim said.

In addition, Saudi Arabian Airlines has taken delivery of the first two 777-300ERs as part of a 12-aircraft order signed in April 2010. The airline received its first 777, a 777-200ER, in December 1997 and currently owns and operates 23 of the aircraft. Boeing Commercial Airplanes president and CEO Jim Albaugh said Boeing was grateful for the confidence Saudi Arabian Airlines has placed in the 777 and in Boeing.

"We will continue working closely with the airline to provide the best commercial aircraft and services to support its plans for growth, and we look forward to strengthening our partnership with Saudi Arabia by supporting the Kingdom’s goals for technology development and education," Albaugh said.

The twin-engine 777-300ER comes with extended range and payload capabilities, enhanced engine efficiency and design changes that reduce drag and aircraft weight, contributing to the increased capability. The Boeing 777-300ER can seat 368-550 passengers and offers a range of up to 7,930nm (14,685km), allowing airlines to serve non-stop routes demanded by passengers.