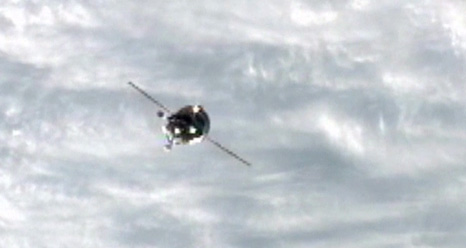 A Russian cargo spacecraft carrying 2.6t of cargo of fuel, water and food supplies, as well as scientific equipment has docked at the International Space Station.

The new robotic Russian space freighter was launched into orbit last week from the Baikonur cosmodrome in Kazakhstan on board a Soyuz-U booster rocket.

The spacecraft will deliver the essential supplies for three astronauts and three cosmonauts making up the Expedition 30 crew.

The Progress spacecraft is 24ft (7.3m) long and has a three-module design resembling the crewed Soyuz space capsules which are used to ferry crew members from the International Space Station.

The spacecraft has a propellant module filled with fuel for the station’s Russian-built thrusters vehicles, replacing the central crew capsule.

Progress vehicles are disposable and can be commanded to burn up in space after they complete their space mission.

Earlier this week, an older Progress spacecraft – Progress 45 – undocked from the space station for the news supply ship to dock at the ISS.

Before burning into Earth’s atmosphere Progress-45 deployed a 40kg satellite, Chibis-M, into a slightly higher orbit for ISS.

The Chibis-M miniature satellite is expected to study how plasma waves interact with Earth’s ionosphere.

Russia’s Soyuz spacecraft are the only vehicles currently capable of ferrying astronauts to and from low-Earth orbit after the retirement of NASA’s space shuttle fleet in 2011.

Last August, a Soyuz spacecraft and the Progress supply ship it was carrying crashed minutes after blast off from Baikonour hitting launches to ISS for three months.