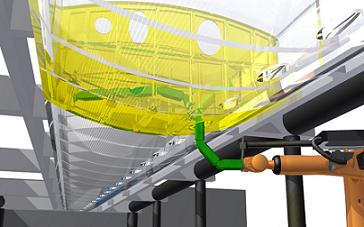 Researchers at the Fraunhofer Institute for Machine Tools and Forming Technology IWU in Chemnitz, Germany, are developing a new snake-like robot to automate the assembly process of aircraft wings.

The automation solution is based on articulated robot arms and will be capable of tightening bolts in even difficult-to-access cavities of the wing structure.

The primary reason for this is the complicated internal structure of wings, which consist of a series of hollow chambers.

IWU project manager Marco Breitfeld said that: "The robot is equipped with articulated arms consisting of eight series-connected elements, which allow them to be rotated or inclined within a very narrow radius in order to reach the furthest extremities of the wingbox cavities."

"The robot is equipped with articulated arms consisting of eight series-connected elements, which allow them to be rotated or inclined within a very narrow radius in order to reach the furthest extremities of the wingbox cavities."

The tool is attached to the first in the series of eight limbs, and if required, can be replaced by an inspection camera. The 2.5m-long robot arm is capable of supporting tools weighing up to 15kg.

Researchers have integrated a small motor in each of the eight sections of the robot arm, which are together capable of generating a high torque of up to 500 Newton metres (Nm).

Each section of the robot arm, used in conjunction with a cord-and-spindle drive system, can be moved separately and turned through an angle of up to 90°.

"The drive concept allows this solution to be used in any situation requiring the application of high forces and torque within a limited space," Breitfeld said.

During the next stage of the project, the IWU researchers will install the 60kg robot on a mobile platform or rails for it to travel along the length of the wingbox and penetrate each chamber.

A demonstration model of the robot will be showcased at the Automatica trade show in Munich from 3-6 June, with a full version of the system scheduled to be created before the end of this year.

Image: The robot winds its way through the narrow openings inside the airfoil like a snake. Photo: courtesy of Fraunhofer IWU.