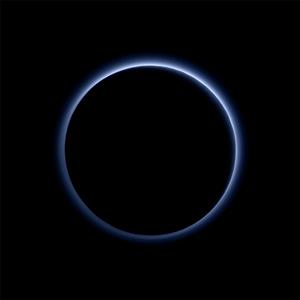 The images sent by Nasa’s New Horizons spacecraft have revealed blue skies and water ice on Pluto, while the Curiosity Rover confirmed the presence of an ancient lake on Mars.

The first colour images of Pluto’s atmospheric hazes sent by New Horizons shows that the hazes are blue.

SwRI science team researcher Carly Howett said: "That striking blue tint tells us about the size and composition of the haze particles.

"A blue sky often results from scattering of sunlight by very small particles.

"On Earth, those particles are very tiny nitrogen molecules. On Pluto they appear to be larger, but still relatively small, soot-like particles we call tholins."

The researchers think that the haze particles in Pluto’s atmosphere are the right size and composition to carry blue light in sunlight.

On Earth, nitrogen particles spread light, while the same tholins make the surface red on Pluto.

"We don’t yet understand the relationship between water ice and the reddish tholin colourants on Pluto’s surface."

Scientists believe that tholin particles form high in the atmosphere, as they do not form naturally on Earth.

"Understanding why water appears exactly where it does, and not in other places, is a challenge that we are digging into."

"We don’t yet understand the relationship between water ice and the reddish tholin colourants on Pluto’s surface."

In another study, Nasa’s Mars Science Laboratory, Curiosity Rover has confirmed that billions of years ago water storing lakes were present on Mars.