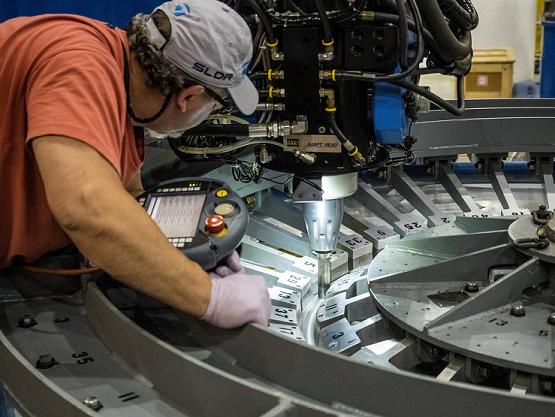 Lockheed Martin and Nasa engineers have welded the tunnel and forward bulkhead of the Orion crew module that will fly atop the Space Launch System (SLS) rocket.

Work on the Orion module is being performed at the agency’s Michoud assembly facility in New Orleans, US.

The forward bulkhead is at the top of the spacecraft, and features critical systems such as the parachutes that deploy during re-entry, while the tunnel acts as a passageway for astronauts to move between the module and other spacecraft.

Orion programme manager Mark Geyer said: "Each of Orion’s systems and subsystems is assembled or integrated onto the primary structure, so starting to weld the underlying elements together is a critical first manufacturing step.

"The team has done tremendous work to get to this point and to ensure we have a sound building block for the rest of Orion’s systems."

Orion team have reduced the number of welds for the crew module on reviewing the manufacturing process of the first test version of Orion’s primary structure for the Exploration Flight Test-1 last December.

"We used the pathfinder to make sure we weren’t being too ambitious with our design changes."

Lockheed Martin Orion vice-president and programme manager Mike Hawes said: "So for this next spacecraft, seven bigger pieces are coming together, instead of the eighteen for EFT-1, which makes the welding process a little more challenging than before."

Technicians practised their new welding process on a pathfinder, a full-scale version of the current spacecraft design.

"We used the pathfinder to make sure we weren’t being too ambitious with our design changes," Hawes added.

"It allowed us to verify the process would work before we used it on actual flight hardware."

In the coming months, other pieces of Orion’s primary structure will be evaluated and welded together.

The structure is planned to be shipped to Nasa’s Kennedy Space Center in Florida in early 2016 to undergo final assembly, integration and testing in preparation for Exploration Mission-1.

The test flight will send Orion into lunar distant retrograde orbit to evaluate Orion and SLS for human-rated exploration missions.