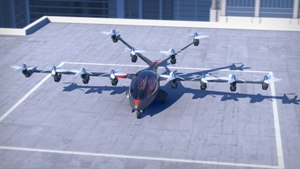 US-based Joby Aviation has developed a 16-rotor electric vertical take-off and landing (VTOL) that transforms into a plane midair and cruises up to 200 miles at 200mph.

The two-seater aircraft, S2, is powered by lithium nickel cobalt manganese oxide batteries, that are claimed to provide a reliable method of transportation.

The plane, which is currently under development, consumes five times less energy than other conventional vehicles, making it environmentally friendly, as well as a faster method of door-to-door transportation.

S2 is equipped with 16 electric propellers, 12 of which are intended for VTOL, without a runway that is required by other traditional aircraft during take-off and landing.

According to the company, the aircraft has a distributed propulsion system, which will offer improved redundancy, better safety and less maintenance.

During its flight, the aircraft’s 12 large propellers are capable of tilting forward, providing the aircraft with a balanced and multirotor vertical life for take-off and landing.

Each of the individual motors drive a single fixed-pitch propeller, which is used during take-off and landing.

"By distributing these propellers across the leading edge of the wing, we are able to increase the dynamic pressure over the wing."

The blades can fold against the nacelles, helping to minimise their cruise drag impact. Nasa, through its GL-20′ Greased Lightning’ prototype, recently proved the technology used by Joby in S2.

Joby’s S2 aircraft has 12 propellers that will convert into aerodynamic bullet shapes and will be replaced by four thin rotors after reaching cruising speed.

Joby Aviation founder JoeBen Bevirt was quoted by ReadWrite: "If we can build an aircraft, which is quiet, safe and efficient, and you get door-to-door at five times the speed of ground transport, it will radically change life.

"It will have a transformative effect."

"By distributing these propellers across the leading edge of the wing, we are able to increase the dynamic pressure over the wing and build an aircraft with a smaller more efficient wing."

S2 is further designed to function in low tip speeds and can take-off quietly. Due to an electric motor attached to the plane, it is capable of using ambient wind to put power back into the battery, while on the ground.

According to Joby, S2’s cost of production is $200,000 that can be maintained at a very minimal cost.

In 2009, the company produced control systems and electric propulsion systems, which are continually being developed.