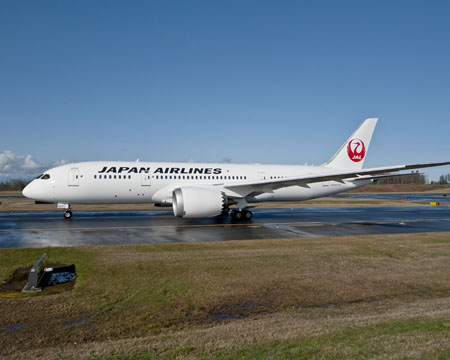 Japanese regulators have identified the reasons for the fuel leaks and other problems that occurred on Japan Airlines’ (JAL) 787 Dreamliner jets in January but are still investigating battery problems that caused worldwide grounding of the aircraft.

Japan’s Transport Ministry concluded that the fuel leak which occured on 9 January, prior to the takeoff of JAL 787 in Boston, was due to a foreign material 1.5mm big that was stuck to fuel valves and caused them to remain partially open.

In addition, a fuel leak on the same aircraft at Tokyo’s Narita airport, on 13 January, was caused by an improperly applied electrical-insulating coating material.

It also revealed that inadequate taping caused a crack in the window of the cockpit and a faulty part resulted in brake problems.

The ministry has ordered JAL and All Nippon Airways (ANA) to conduct checks on fuel-ejection valves during inspections and ensure that there is no unintended fuel movement prior to each flight.

“The ministry has ordered JAL and All Nippon Airways (ANA) to conduct checks on fuel-ejection valves during inspections.”

All Dreamliners in-service worldwide have been temporarily grounded since mid-January following a battery fire on a 787 aicraft parked in Boston’s Logan International Airport and another case of overheated battery, which prompted ANA’s jetliner to make an emergency landing.

Last week, the Japan Transport Safety Board (JTSB) found incorrect wiring of auxiliary power unit to the main battery in the ANA’s 787 but stated that this did not likely cause the overheating of the main battery .

So far, Boeing has received around 800 firm orders for 787 Dreamliners, with 50 aeroplanes having been delivered to operators so far.

Made primarily of carbon composites, the lighter weight 787 features improved aerodynamics and advanced engine technology, according to Boeing, it also uses 20% less fuel compared with rival aircraft in the segment.

Image: Japanese regulators concluded that the fuel leak problems on Japan Airlines’ (JAL) 787 were due to a improperly applied coating material and a foreign material that was stuck to fuel valves. Photo: courtesy of Boeing.