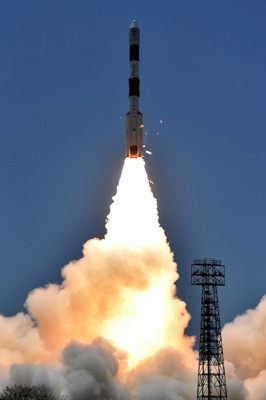 The Indian Space Research Organisation (ISRO) has begun the countdown for the launch of its fifth navigation satellite.

A PSLV-31 rocket is expected to launch the satellite on Wednesday from the Sriharikota launch pad.

In the first launch of this year, the PSLV-31 will place the 1,425kg IRNSS-1E satellite into its orbital position, at an altitude of 503.3km.

The IRNSS-1E will carry navigation and ranging payloads.

ISRO said that the navigation payload would transmit service signals to the users and the ranging payload will provide precise determination of the range of the satellite.

The Indian Regional Navigation Satellite System (IRNSS) is a domestically built satellite navigation system, which is designed to provide real-time positioning and timings over India and its surrounding region, covering an area of 1,500km.

India has already launched four regional navigational satellites, including IRNSS-1A, 1B, 1C and ID, which form part of a seven-satellite constellation.

"The IRNSS is expected to reduce India’s dependency on other satellite navigation services."

IRNSS is consist of nine satellites, which involved placing seven in orbit and two on the ground as standbys. The system requires four satellites to provide navigational updates, reports IANS.

ISRO is planning to launch the seven-satellite IRNSS constellation later this year.

In 2013, the first satellite IRNSS-1A was launched followed by the second IRNSS-1B in April 2014, the third on October 2014 and the fourth last year.

Once fully operational, the IRNSS is expected to reduce India’s dependency on other satellite navigation services.

The satellite has a lifespan is 12 years.

Image: Fully integrated PSLV-C31 with IRNSS-1E being moved to the launch pad. Photo: courtesy of ISRO.