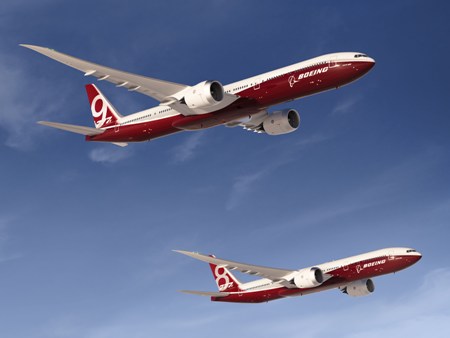 Incorporating stiff carbon fibre and a new epoxy resin, the material will also be modified from titanium to a steel alloy to further strengthen the blade.

The new material will undergo various tests this quarter, and be tested on the GE9X blade design in 2015.

The company said that the GE9X engine will have fewer and thinner composite fan blades compared to other GE wide-body engines in service.

Built on the GE90-94B, GE90-115B and GEnx engine variants, the GE9X fan blades are the fourth-generation composite design.

"Fewer, thinner blades will enhance the airflow and make for a lighter, more efficient fan that will help with the GE9X engine’s overall performance and fuel burn."

Categorised under the 100,000lb thrust class, the GE9X engine will have a 133in diameter composite fan case and 16 composite fan blades, an 11-stage high-pressure compressor, a third-generation twin annular pre-swirl combustor and ceramic matrix composite material in the combustor and turbine.

GE plans to invest $300m on the new GE9X engine programme for technology maturation testing this year, including the universal propulsion simulator fan performance tests and testing of ceramic matrix composite components in a GEnx engine.

The company plans to carry out the first full core test in 2015 and test the first engine in 2016 with plans for flight testing on flying test bed in 2017. Certification for the engine is scheduled for 2018.