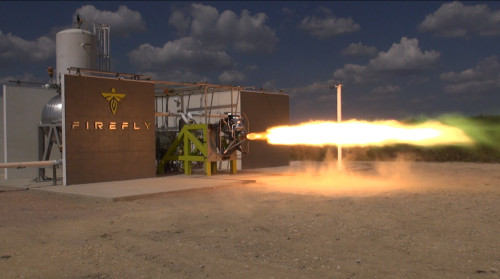 FRE-R1 is a propulsion engine designed to power both stages of the company’s Firefly Alpha small-sat launcher.

During the trial, the engine start-up, shutdown, and steady state combustion were successfully demonstrated.

Firefly co-founder and CEO Dr Thomas Markusic said: "The successful testing of our first engine represents a quantum step in the technical maturation of our company.

"We have demonstrated that our core engine design can reliably start, stop and operate at a steady state without combustion instabilities."

"Our core engine design can reliably start, stop and operate at a steady state without combustion instabilities."

The company is currently working on a combustor design for both stages of the launcher.

Alpha’s upper-stage will use an engine (FRE-1) with a single combustor to produce 7,000lbf thrust, while the first stage engine (FRE-2) will feature 12 combustors arranged in an annular aerospike configuration to generate 125,000lbf thrust.

The company said that the future tests will focus on performance tuning and longer duration mission duty cycle runs.

Markusic said: "In only 15 months, we have built our Texas team, constructed state-of-the-art engineering and test facilities, designed a complete rocket (Alpha) to PDR level, and built and tested key vehicle technologies, such as the FRE-R1 engine."

The FRE-2 aerospike engine’s first hot-fire tests are planned to be performed in early 2016.