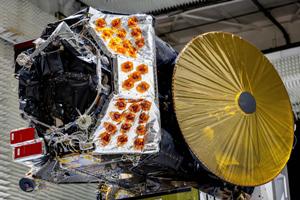 The ExoMars 2016 spacecraft, built by French aerospace group Thales Alenia Space is ready to leave for its launch site in Baikonur, Kazakhstan after completing integration and testing.

Following its arrival at the launch site, the final functional tests, propellant filling and launcher integration of the spacecraft will be carried out.

The spacecraft is scheduled to be launched in March next year.

ExoMars or Exobiology on Mars is an astrobiology mission, which will observe the atmosphere and surface of Mars for nearly two years.

"The spacecraft is scheduled to be launched in March next year."

The Italian Space Agency (ASI) is also involved in the project and developed a laser micro-reflector known as INstrument for landing-Roving laser Retroreflector Investigations (INRRI) for the mission.

In this venture, ASI received support from National Institute for Nuclear Physics (INFN). Apart from Thales Alenia, 134 other space companies are involved in the project.

Thales Alenia Space deputy CEO Donato Amoroso said: "For Thales Alenia Space, our lead role in the extraordinary ExoMars programme, as producer of the orbiter and the descent and landing module for on-site exploration of Mars, entails huge technological and human challenges.

"To meet this challenge, Thales Alenia Space called on over forty years of experience in exploration programmes, in particular the successful Cassini/Huygens mission, which realised the daring feat of landing on Titan, one of Saturn’s moons, as well as all European probes already sent to Mars, Venus, the comet Churyumov-Gerasimenko, and to Mercury in the future."

ExoMars 2016 further aims to conduct scientific sampling of the Martian surface and offer telecommunication support for the next mission to be carried out in 2018.

Image: ExoMars spacecraft completes integration and testing and is ready to leave for its launch site. Photo: courtesy of Thales Group.