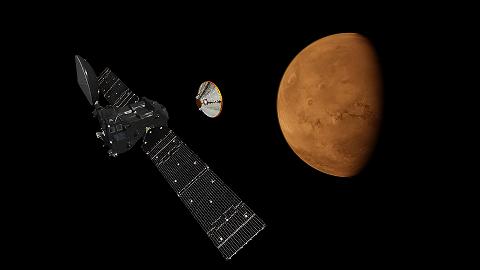 The launch of the European Mars orbiter and lander ExoMars has been postponed to next March due to problems with two sensors in the entrance, descent and landing demonstrator module of the propulsion system.

Both agencies involved in the mission have agreed to the recommended delay, which will gain final authorisation by a joint steering board on 24 September.

ESA ExoMars project manager Don McCoy said: "A failure in the production process of the pressure transducers has been identified and this leads to concerns about leakage, which represents a major risk to a successful landing on Mars.

"ESA has decided not to accept this risk and to remove both units from the landing module, the knock-on effect being that we can no longer maintain the January 2016 launch window and will instead move to the back-up launch window in March.

"ESA has decided not to accept this risk and to remove both units from the landing module, the knock-on effect being that we can no longer maintain the January 2016 launch window."

"We are pleased to have identified the issue in good time, and are focusing all our efforts to launch on 14 March."

During the mission, a 600kg EDM stationary lander called Schiaparelli will travel to Mars on the Trace Gas Orbiter to demonstrate Europe’s capability of performing a controlled landing on the red planet.

In its five-year long mission, Schiaparelli will study the possible link between atmospheric gases and existing biological or geological activity.

Three days before landing, Schiaparelli will separate from the orbiter and enter the atmosphere of Mars at a speed of 21,000km/h.

The module is designed to be slowed to less than 5km per hour at the height of 2m above the surface by a liquid-propellant thruster system, after which, the thrusters will go off and the lander will drop to the ground.

Following this, Schiaparelli will enter the atmosphere to make a landing on Mars in a place called Meridiani Planum.

Before launch, a defect was detected in two pressure transducers mounted in the propulsion system that monitors auxiliary data to be gathered by Schiaparelli. Instead of replacing the transducers, the decision was made to remove them and meet the new launch window.

Due to the orbital positions of Earth and Mars, the mission will arrive at Mars in October, as previously scheduled.

Image: An artistic impression of the separation of the ExoMars 2016 entry, descent and landing demonstrator module Schiaparelli. Photo: courtesy of ESA/ATG medialab.