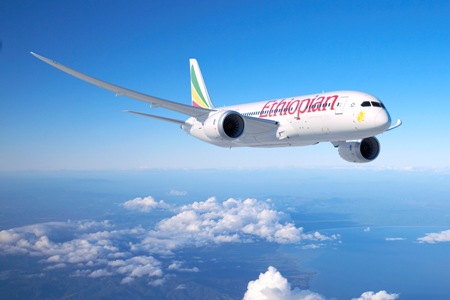 Ethiopian Airlines is planning to double its aircraft fleet and add new routes by 2025.

The airline currently operates a 77 aircraft, including 13 Boeing 787-8 Dreamliner aeroplanes. The company has 50 aircraft on order, which includes 14 Airbus A350 and six 787.

Ethiopian Airlines Nigeria office general manager Solomon Begashaw was quoted by local media as saying: "Our vision in 2025 is to be the leading airline group in Africa, with seven profit-orientated centres and a four-star airline with five-star services.

"Ethiopian Airlines has requested US President Barack Obama to re-open the US Export-Import Bank, to offer loan guarantees and other assistance."

"In our vision 2025, our mission is to transport 22 million passengers per annum; currently we are at six million plus per annum."

Ethiopian Airlines has requested US President Barack Obama to re-open the US Export-Import Bank, to offer loan guarantees and other assistance to foreign customers.

The export credit agency has halted loans and assistance to overseas companies as its authorisation lapsed in June.

Ethiopian Airlines CEO Tewolde Gebremariam was quoted by Reuters as saying: "We want [the bank] to continue because that is our main, and perhaps only, means of financing our airplanes and financing our growth in the future."

The airline intends to expand its operations to Jakarta, Ho Chi Minh City, and the Chinese cities of Chengdu and Shenzhen.