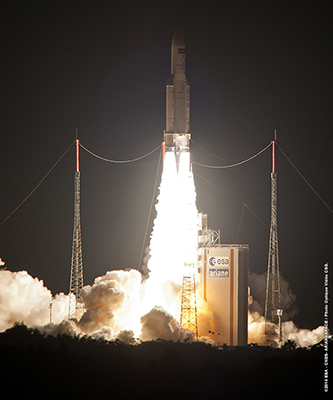 Claimed to be the heaviest payload ever launched by Europe, the space vehicle will deliver 6,602kg of freight, including 2,681kg of dry cargo and 3,921kg of water, propellants and gases.

ESA Human Spaceflight and Operations director Thomas Reiter said: "It is with great pride that we saw the fifth successful launch of this beautiful spacecraft.

"But the adventure doesn’t end here. ATV knowhow and technology will fly again to space as early as 2017 powering Nasa’s Orion spacecraft with the European Service Module, ushering in the next generation of space exploration."

"ATV knowhow and technology will fly again to space as early as 2017 powering NASA’s Orion spacecraft with the European Service Module, ushering in the next generation of space exploration."

The cargo also includes compound scientific hardware including the electromagnetic levitator for experiments to enhance industrial casting processes, in addition to a sophisticated joystick that will test the deployment of force feedback in weightless environments.

Upon scheduled docking with ISS on 12 August, space station crew members will carry out cargo operations, with the real-time monitoring to be executed from the ATV Control Center in Toulouse, jointly run by ESA and France’s CNES space agency.