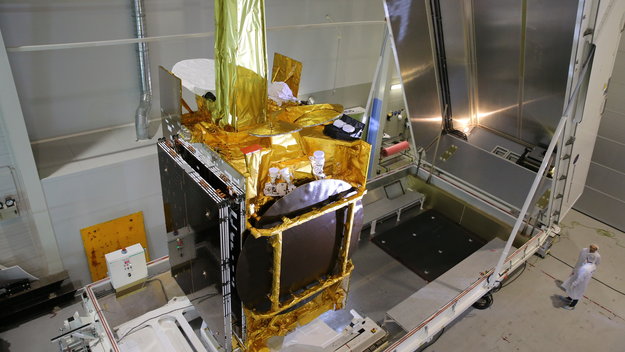 EDRS-A, the first element of the European Data Relay System (EDRS) is being prepared for launch in late January by a Eutelsat-9B satellite.

After ending the search for a Proton rocket to launch the system, the EDRS-A laser communications payload and its host satellite arrived at the Baikonur cosmodrome launch site in Kazakhstan.

During its mission, EDRS-A will gather information from low-orbiting satellites through laser and send it down to Earth almost in real-time.

The laser terminal included in the EDRS-A is an autonomous telescope that works with the help of mirrors that allows the laser to lock on to its mark in lower orbits from its own geostationary orbit position.

EDRS-A expects to locate moving targets at up to 45,000km of distance with laser beams, which provides more accuracy and capacity than radio. Laser beams are capable of relaying 1.8Gbit/s of user data.

The terminal will be equipped with a Ka-band radio transmitter to relay data to a ground station.

EDRS-A payload engineer Nicolas Le Gallou said: "Checks on the payload here in Baikonur include verification of the good health of all the radio-frequency equipment.

"The terminal is in excellent shape and all the tests we have performed so far have demonstrated its readiness for the mission."

"The digital processor, modulators and receivers have all been checked to make sure they were not harmed during transit.

"All the results were in line with the tests done in Toulouse prior to shipment."

In order to capture a moving target, EDRS-A will also require extreme precision. The terminal mirrors need to be free of grime and dust to ensure precision.

ESA’s Martin Born said: "The terminal is in excellent shape and all the tests we have performed so far have demonstrated its readiness for the mission.

"It has been purged with dry nitrogen gas to prevent any contamination from getting into the aperture.

"The multilayer insulation has been sealed for flight, and the terminal will now remain closed and locked until EDRS-A reaches orbit."

A public-private partnership between ESA and Airbus Defence has been carrying out the EDRS-SpaceDataHighway mission. The partnership is planning to launch two more spacecraft as part of the EDRS system in 2017 and 2019 respectively.

Image: EDRS is ready for shipping. Photo: courtesy of ESA.