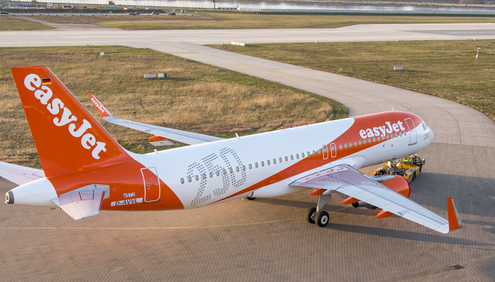 EasyJet is planning to trial new hydrogen fuel cell powered hybrid planes to save up to 50,000t of fuel a year and cut carbon emissions.

The new concept can help the airline to save $25m-$35m a year on the cost of fuel, reports Reuters.

The technology works by tapping energy as the plane brakes on landing and uses captured energy to power the aircraft while taxiing on the land. The technology is similar to the one designed for Formula 1 cars.

EasyJet is currently using 4% of its total fuel on taxiing, which is equivalent to an average of 20 minutes per flight.

According to EasyJet, hybrid planes will be equipped with electric motors in the main wheels that help the plane to manoeuvre in and out of the airport stands for taxiing.

"EasyJet is currently using 4% of its total fuel on taxiing, which is equivalent to an average of 20 minutes per flight."

The practice is believed to improve operations and regularity of planes. The airline is aiming to reduce 7% of CO2 emissions by 2020.

EasyJet engineering head Ian Davies was quoted by International Business Times saying: "We thought if hydrogen can power a car or a bus, why can’t we power enough of the aircraft during turnaround, and even taking it a step further at 150kw to power a green taxi system, we can make the whole ground journey silent.

"The hybrid plane concept we are announcing today is both a vision of the future and a challenge to our partners and suppliers to continue to push the boundaries towards reducing our carbon emissions."

The design of the hybrid plane was finalised from a competition organised with Cranfield University to conceptualise future aircraft ideas.