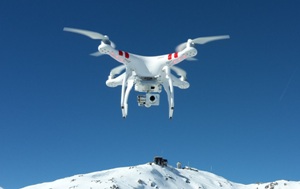 Chinese company DJI has launched a drone called Agras MG-1 that is designed to spray pesticides on crops.

The first-of-its kind Agras MG-1 features eight-rotors and carries more than 10kg of liquid to spray on the crops.

With four replaceable ceramic nozzles, it can spray pesticides between seven and ten acres of land per hour and claimed to be 40 times more beneficial than manual spraying.

The unmanned aerial vehicle (UAV) is dustproof and water-resistant. Anti-corrosive materials were used while manufacturing the UAV.

The drone can be rinsed clean with water and can be folded up for easy transport and storage after use. The foldable drone can fly at a speed of up to eight metres per second.

"The launch of DJI’s agricultural drone displays our unmatched knowledge base and development skills."

Agras MG-1 can also automatically adjust its height and distance from the crops to ensure a balanced spraying intensity.

"With this new product, we have shown that DJI can not only offer the ultimate aerial experience for the mass consumer, but also improve the efficiency of production and benefit so many others in all walks of life."

The body of the Agras MG-1 is sealed and has an integrated centrifugal cooling system that extends its motor life significantly. DJI will launch the drone in the Chinese and Korean markets.