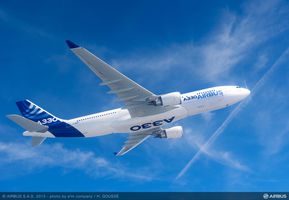 China Aviation Supplies Holding (CAS) has placed $11bn order with Airbus for 45 A330 family aircraft, with an option for 30 additional A330 airliners.

The definitive agreement and memorandum of understanding (MoU) were signed during Chinese Prime Minister Li Keqiang’s visit to Toulouse.

Airbus president and CEO Fabrice Brégier said: "The package order is a new vote of confidence in our A330 Family aircraft, which is already the most popular wide-body aircraft in China.

"China is today the most important market for aviation in the world, we can be confident that air transport in China will continue to undergo rapid growth. We are honoured to contribute to this development."

If the MoU is executed, the value of the contract is expected to increase to $18bn.

"It’s a project which makes a lot of sense and which gives us an advantage against our competition."

With this order, Airbus has finalised plans to build a second plant in China for wide-body aircraft.

The €150m cabin-completion centre will be built adjacent to an existing A320 final assembly plant in Tianjin.

Brégier was quoted by Reuters as saying: "We hope to have more orders in the future, but it’s a project which makes a lot of sense and which gives us an advantage against our competition.

"This should help us a lot to maintain a production rate of six a month that we announced for the transition."

At the recent Paris Air Show, Airbus finalised a deal with Saudi Arabia for 20 A330 airliners.

The European aircraft maker is planning to shift to revised A330neo variant from late 2017 by adding new engines.

Airbus estimates China will require more than 5,300 new commercial passenger aircraft between 2014 and 2033.

Image: An Airbus A330 in flight. Photo: courtesy of Airbus SAS.