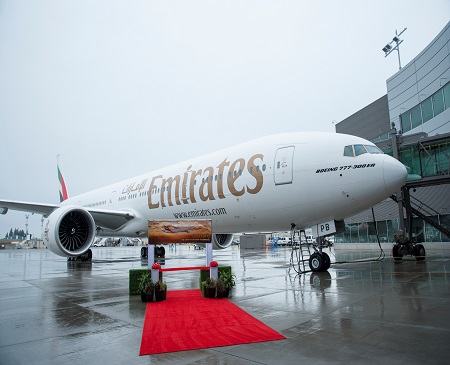 Boeing has delivered three 777 aircraft to Emirates Airline, including two 777-300ERs and one 777 Freighter.

The new aircraft marks the entry of the 150th 777 airliner into Emirates’ fleet.

Boeing said this is the first time in 15 years that it has delivered three 777s simultaneously to a single customer.

Boeing Commercial Airplanes president and CEO Ray Conner said: "This triple delivery to Emirates is an outstanding moment in a partnership that has grown phenomenally over the last three decades.

"As Emirates takes delivery of its 150th 777, it underlines the remarkable track record of this aircraft, undiminished as the leading long-haul passenger and cargo carrier."

Emirates is said to be the largest operator of the 777 aircraft in the world, and is the only airline to operate all six 777 variants.

"As Emirates takes delivery of its 150th 777, it underlines the remarkable track record of this aircraft."

The carrier placed an order for its first Boeing 777 in 1992 with delivery beginning in June 1996.

Emirates president Tim Clark said: "The 777s give Emirates the range, reliability and flexibility to efficiently serve close to 100 destinations on six continents with non-stop flights from our hub in Dubai.

"We are pleased to mark the delivery of our 150th 777 aircraft, and will continue to work closely with the Boeing team on the next-generation 777X for the Emirates fleet."

The 777-300ER is said to be the most reliable twin-aisle aircraft available, with the highest cargo capability of any passenger aircraft. Emirates Airline currently has 46 777-300ERs on order with Boeing.

The carrier has 13 777 freighters in its fleet. The aircraft is designed to fly 4,900nm with a full payload at general cargo market densities.