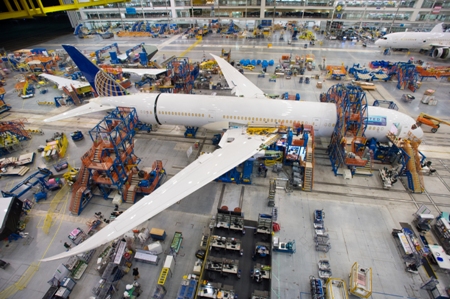 Final assembly of the first 787-9 Dreamliner has started at Boeing’s facility in South Carolina, US, integrating large fuselage sections of the super-efficient jetliner.

Final assembly of 787-9 at the South Carolina plant followed after Everett facility in Washington began 787-9 production in May 2013.

The first South Carolina-built 787-9 will be delivered to United Airlines.

"At 20ft longer than the 787-8, the 787-9 extends in capacity and range and can accommodate around 40 more passengers than its predecessor."

"We’re looking forward to delivering our first South Carolina-built 787-9 to United Airlines, and delivering 787-9s, as well as 787-8s to all our customers."

Spirit AeroSystems builds the forward fuselage sections and other components for the 787 aeroplanes at its manufacturing facility in Wichita, Kansas.

At 20ft longer than the 787-8, the 787-9 extends in capacity and range and can accommodate around 40 more passengers than its predecessor.

The aircraft can fly an additional 450nm and accommodate up to 40 more passengers, while offering 20% in fuel efficiency, 20% fewer emissions compared with similar sized aeroplanes in the segment.