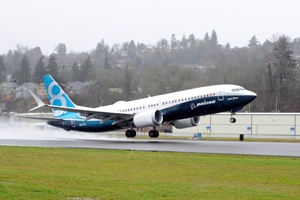 Following completion of the flight test programme, Boeing expects to deliver the first 737 MAX to Southwest Airlines in the third quarter of 2017.

The flight started in Renton field in Renton, Washington, where it was manufactured, and ended at Boeing field in Seattle.

Boeing Commercial Airplanes president Ray Conner said: "Today’s first flight of the 737 MAX carries us across the threshold of a new century of innovation, one driven by the same passion and ingenuity that have made this company great for 100 years.

"We are tremendously proud to begin testing an airplane that will deliver unprecedented fuel efficiency in the single-aisle market for our customers."

"We are tremendously proud to begin testing an airplane that will deliver unprecedented fuel efficiency in the single-aisle market for our customers."

The first flight of 737 MAX 8 was controlled by Boeing chief test pilot Craig Bomben and 737 MAX chief pilot Ed Wilson. During the flight, the plane reached at a maximum altitude of 25,000ft at an airspeed of 463km per hour.

Wilson said: "The flight was a success.

"The 737 MAX just felt right in flight giving us complete confidence that this airplane will meet our customers expectations."

Currently, other members of the 737 MAX family, such as 737 MAX 7, MAX 8, MAX 200 and MAX 9 are being prepared for flighttesting and are at different stages of final assembly.

Compared to the Airbus A320neo, 737 MAX 8 expects to deliver 8% per seat lower operating costs and 20% less fuel consumption than the first next-generation 737s with the ability to fly more than 6,510km.

In September, Boeing started final assembly of the first 737 MAX 8.