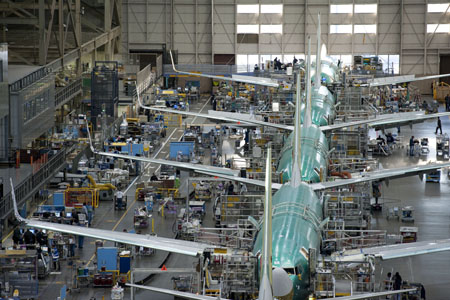 Boeing has reportedly said it is on track to produce 52 medium-haul 737 aircraft per month by 2018.

The company is preparing to boost the 737 production rates alongside its plans to focus on a more fuel-efficient version, the 737 MAX.

Boeing aircraft programmes senior vice-president Pat Shanahan was quoted by Reuters saying: "To the extent that we could accommodate uncertainty and risk, or reduce risk, we are much better postured today than when we have tried this in the past.

"When I think about the mistakes we made back then, we didn’t have an integrated plan that included the supply chain."

"The company is preparing to boost the 737 production rates alongside its plans to focus on a more fuel-efficient version, the 737 MAX."

In 1997, the company made a similar attempt for a large production boost and model shift, but its plans were hit by part shortages causing the 737 programme to be delayed for several weeks. Boeing was also forced to cease assembly of the 747 jumbo jetliners.

Industry experts said the company is evaluating its supply chain to raise its production target to 58. Boeing said it will stick to its target of 52.

The company intends to create a production system for the revamped model of the 777 and 777X, which is planned to enter service in 2020.

In its 2014 Current Market Outlook report, Boeing projected the demand for single-aisle aircraft to reach more than 25,000 in the next 20 years.