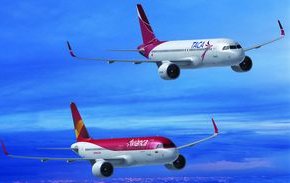 Colombian airline AviancaTaca Holding (AV) and its Ecuadorian subsidiary, AeroGal, have confirmed their order for 51 Airbus narrow-body A320 jets with Airbus in a deal worth $4.8bn.

The order, which includes 33 A320neo and 18 A320 family aircraft, follows the memorandum of understanding (MOU) at the Paris Air Show in June 2011.

AviacaTaca president, Fabio Villegas, said: "With this order AviancaTaca and its subsidiaries will continue the modernisation process that includes fleet renewal as its primary focus. Our goal is to offer travelers the most comfortable and efficient aircraft in the market, and we are proud that the A320neo aircraft is recognised for its eco-efficiency and cutting-edge technology."

The acquisition of the new aircraft will sustain the airliner’s foray into new markets in Latin America, as well as keeping the airline’s fleet among the youngest in the region.

The A320neo will offer new engine options as well as provide 15% fuel economy over current models and is scheduled to enter into service in 2015.

The NOx emissions of the A320neo are 50% below CAEP/6 and it also has a smaller noise footprint.

A320neo aircraft has 95% airframe commonality, which makes the aircraft easy to fit into current fleets whilst also offering up to 500 nautical miles (950km) more range than the other aircraft.

The Colombian airline has so far ordered 190 Airbus aircraft, including the latest 51 aircraft, while it currently operates 88 A320 family aircraft and eight A330 and A318, A319 and A321 aircraft.

AviancaTaca and its subsidiaries have reported a 17.8% rise in passenger numbers in 2011 to 20,751261 when compared to 2010 and the airlines have also seen a 12% rise in its passengers in December 2011 when compared to the same month the previous year.

Airbus has sold 666 aircraft in Latin America and has a backlog of 351 with customers in the region.

Image: AviancaTaca currently operates a fleet of 88 A320 family aircraft and eight A330. Photo: Airbus