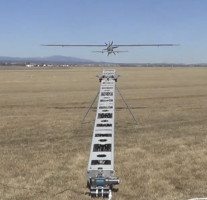 The PV will be used on the aircraft’s solar wings.

"Working closely with Silent Falcon, we have demonstrated a product specific to their needs and specifications, as well as assisting them in related power management technologies."

"Silent Falcon is taking and filling its initial customer orders."

Bye Aerospace said that the Silent Falcon is available for flight demonstrations, and expects to receive orders exceeding several hundred units a year.

Ascent Solar Technologies was selected in 2012, to provide solar cells on the Silent Falcon wings.