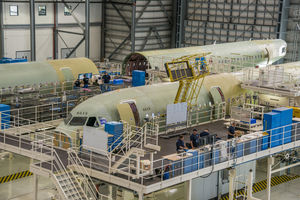 Airbus has officially opened its first manufacturing facility in the US, to assemble and deliver A319, A320 and A321 aircraft.

The Mobile, Alabama-based plant has a team of more than 250 working on the first US-made Airbus aircraft.

"With the addition of our US facility to our production network in Europe and Asia, we have strategically expanded our worldwide industrial base."

The new facility is part of Airbus’ strategy to strengthen its position in all key markets, and increase production to serve the global demand.

Announced in 2012, the $600m project started construction activities the following year. By 2018, the Alabama facility is expected to produce up to 50 single-aisle aircraft a year.

"We’re a little bit behind schedule in certain parts of the project, but none of that is going to affect the actual delivery."

The company expects the first US-made commercial aircraft, an A321, to be delivered to JetBlue Airways in the second quarter of 2016, reported Reuters.

American Airlines Group will receive the second aircraft from the plant in late 2016.

Airbus Americas president Barry Eccleston said: "If we look at the original master programme, we’re a little bit behind schedule in certain parts of the project, but none of that is going to affect the actual delivery.

"We still think we’ll make the delivery on the original schedule."

The programme is reportedly eight weeks behind schedule due to problems with certain tools.

Airbus estimates a demand for around 4,700 single-aisle aircraft in North America over the next 20 years.

Apart from the Alabama plant, the company assembles commercial aircraft at its facilities in Hamburg in Germany, Tianjin in China, and Toulouse, France.

Image: The Airbus Mobile facility that will assemble A319, A320 and A321 aircraft. Photo: courtesy of Airbus SAS.