X
Advertise with us
Mrinmoyee 9 May 2016 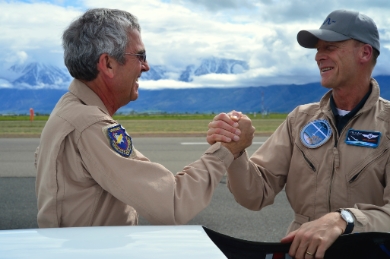 Global aerospace company Airbus Group has completed a test flight of the Perlan 2 glider, an engineless aircraft designed to reach the edge of space.

Co-piloted by Airbus Group CEO Tom Enders, the flight lasted for several minutes, instead of the planned 30min to 2h, due to bad weather.

According to Jim Payne, Perlan 2 is considered to be more efficient in dry weather, reported AFP.

Developed by Perlan Project, a volunteer-run, non-profit endeavour headed by aerospace and engineering leaders, and supported by Airbus Group and a group of other sponsors, Perlan 2 is a pressurised sailplane designed to ride air currents that can reach into the stratosphere in certain mountainous regions near the North and South Poles.

"Airbus Perlan Mission II is all about pushing the boundaries of innovation, refining our understanding of our environment and climate change, and inspiring a new generation of aerospace pioneers.

The Airbus Perlan Mission II team expects to relocate its operations later this year to Patagonia, Argentina, where conditions will help the team to introduce flights that will ultimately take them as high as 90,000ft.

The glider’s true flight speed at that altitude is expected to be more than 644km/h and the air density will be less than 2% of it is at sea level.

The crew will breathe pure oxygen through a rebreather system, similar to what astronauts use in space.