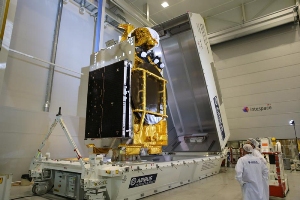 Arabsat-6B (Badr-7) satellite, developed by Airbus Defence and Space, will be launched into space on 10 November.

Developed in association with Thales Alenia Space, the satellite will support Arab Satellite Communications Organisation in enhancing telecommunications and TV broadcast services in the Middle East and Africa.

Arabsat-6B will be launched from French Guiana spaceport on Europe’s heavy launcher Ariane 5 into a geostationary transfer orbit.

It will be the seventh Eurostar satellite from Airbus Defence and Space to Arab Satellite and the third of the five being launched by Airbus this year.

"Not only is it the first sixth-generation Arabsat satellite in which we have incorporated the best of our expertise and technologies, but also the seventh Eurostar satellite we are delivering to Arabsat."

"BADR-7 will also enable Arabsat to access new markets in Ku-band for telecom and DTH over Africa."

The satellite will be renamed Badr-7 once it has been launched into orbit with a launch mass of 5,800kg and 11.5kW of power.

During its course in space for more than 15 years, it will operate 27 transponders in Ku-band and 24 beams in Ka-band.

Arabsat president Khalid Balkheyour said: "Badr-7 will be joining our Badr network at Arabsat 26° E hotspot, expanding our coverage over the MEA region.

"It will carry a dedicated Ka-band payload for broadband and interactive triple play services.

"BADR-7 will also enable Arabsat to access new markets in Ku-band for telecom and DTH over Africa."

Airbus completed final integration and testing of Arabsat in October.

Image: Arabsat-6B (Badr-7) satellite, developed by Airbus Defence and Space, will be launched into space on 10 November. Photo: courtesy of Airbus.