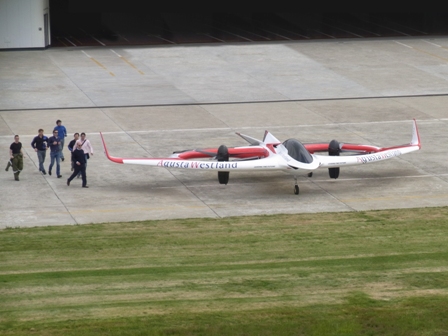 The Project Zero demonstrator is designed to takeoff and land similar to a helicopter and can then be converted to a fixed-wing aircraft during forward flight.

This is achieved through its two electric-powered integrated rotors, which can be tilted through more than 90°.

Project Zero features detachable outer wings for missions that will be performed primarily in helicopter mode; the Elevons provide pitch and roll control in forward flight; and the V-tail offers longitudinal stability.

The aircraft completed its first unmanned flight in June 2011 at AgustaWestland’s Cascina Costa facility in Italy and since then it has undergone several flight trials between 2011 and 2012.

"We strongly believe in the tilt rotor concept as the future of high-speed rotorcraft flight as it offers much greater speed and range than compound helicopter technology," Romiti said.

AgustaWestland research and technology vice president James Wang said that the team of engineers have built and tested this demonstrator in a particularly short period of time.

"The team did not just build an electric powered airplane or helicopter; that would have been too easy. They went all out and built a twin rotor electric tiltrotor with no transmission or swashplates," he said.

"The team went all out and built a twin rotor electric tiltrotor with no transmission or swashplates."

With a low noise and thermal signature in flight, the electrical drive system does not require oxygen, which allows it to fly at an altitude or in heavily polluted conditions such as volcanic eruptions.

It eliminates the complex and heavy transmission system required by conventional rotorcraft.

The rotors of the demonstrator on the ground can be tilted forward, while pointing the aircraft into wind allows the rotors to windmill and recharge the electrical storage device.

AgustaWestland stated that the company is also considering future hybrid solutions using a diesel engine to drive a generator to keep the electrons flowing.

The company is entirely funding its Project Zero technology demonstrator programme as part of its ongoing research and development activities.