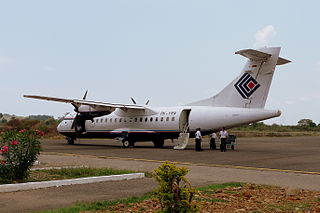 An ATR 42-300 twin turboprop aircraft of Trigana Air Service has crashed in a remote region of the Papua province in Indonesia, with 54 passengers and crew members on-board.

The Trigana aircraft was flying from Jayapura’s Sentani Airport to the town of Oksibil.

Indonesia Air Transportation director general Suprasetyo was quoted by Reuters as saying: "The latest information is that the Trigana aircraft that lost contact has been found at Camp 3, Ok Bape district in the Bintang Mountains regency.

"Residents provided information that the aircraft crashed into Tangok mountain."

"The latest information is that the Trigana aircraft that lost contact has been found at Camp 3, Ok Bape district in the Bintang Mountains regency."

This is the latest in a series of aviation disasters experienced by Asian carriers. In December, AirAsia flight QZ8501 crashed in the Java Sea, killing all passengers and crew members on-board.

In March 2014, Malaysia Airlines flight 370 disappeared off radars during a flight from Kuala Lumpur to Beijing. The aircraft has been not yet found.

ATR said in a statement: "ATR acknowledges the reported loss of contact of flight TGN267 Trigana Air Service and is standing by to support the relevant aviation authorities."

Since 1991, Trigana Air Service has operated 22 airliners as of December 2013. It serves 21 destinations in Indonesia.

According to the Aviation Safety Network, the airline has recorded 14 serious incidents, and in 2007 the European Union banned Indonesian airlines from flying to Europe over regulatory and safety concerns.