The COVID-19 pandemic has severely impacted the aviation industry, forcing airlines to temporarily ground their fleet. The aviation industry is set to lose between $352bn and $390bn over the full year 2020 due to the coronavirus pandemic, estimates the International Air Transport Association (IATA).

Verdict has conducted a poll to identify the major steps airlines and other aviation companies are taking in response to the effects of COVID-19.

Analysis of the poll results shows that a majority 79% of the businesses have taken one step or another in response to the effects of the pandemic, most of which affect employees, while it is business-as-usual for 21% who responded that no measures have been taken.

Majority of the actions directly affect employees in the industry, the biggest of them being pay cuts (16%) followed by headcount reduction (15%) and initiation of staff leaves (8%).

Flight route suspensions were initiated by 12% of the respondents.

Quick financial support was needed by 18% of the respondents, including 12% applying for government aid, 4% needing to draw additional finance to meet financial commitments and 2% negotiating with banks for a payment holiday. 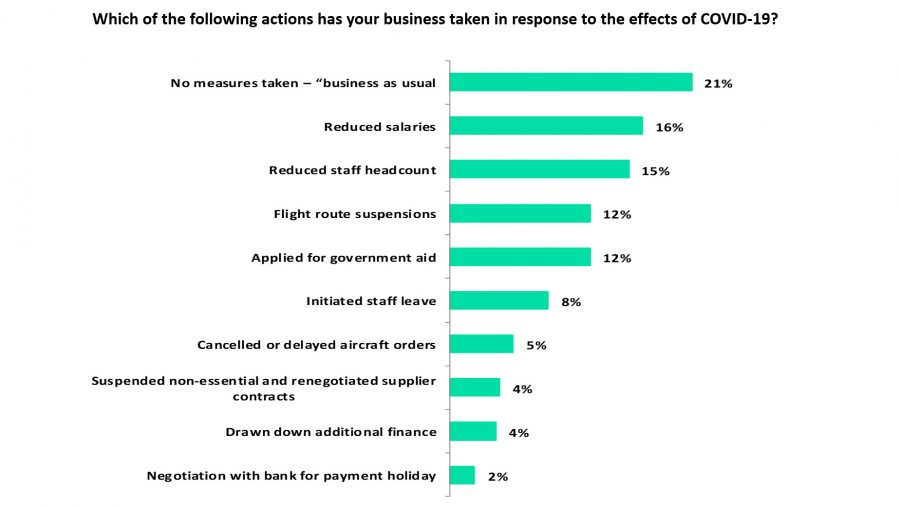 The analysis is based on 335 responses received from readers of Airport Technology, a Verdict network site, from 07 May to 21 August.

Steps airlines have taken to overcome the impact of COVID-19

Despite pent-up demand, consumer confidence in aviation remains low due to health risks and concerns over job security. Further, corporate or business travel remains constrained as companies are under financial pressure and opting for video conferencing in place of in-person meetings.

The IATA estimated in April that more than 25 million jobs in the industry are at risk due to the impact of the coronavirus pandemic. More than 400,000 jobs have been lost or employees furloughed in the industry with more expected as recovery remains sluggish, according to the latest data from Bloomberg.

Airlines including Emirates, Qatar Airways, and Air Canada are either deferring or cancelling purchase of new aircraft. Boeing has an estimated 784 cancellations or uncertain orders, while Airbus reported cancellation of 302 orders as of July.

The support provided to the aviation industry by various governments varies between 1% and 25% of the 2019 revenues of airlines, according to IATA’s estimates. North America provided the highest aid of 25%, while Latin America accounted for the lowest aid of 0.3%.