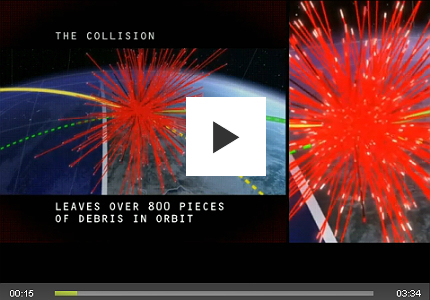 Debris and a defunct Russian military satellite have placed the International Space Station at risk. In order to prevent a collision that could cause devastating damage to the installation, Nasa has confirmed it may have to be manoeuvred out of its current flight path.

Nasa, monitoring the situation from the ground, will calculate the risk of a collision. If the chances are greater than one in 100,000 of being hit, a manoeuvre will be carried out using the European Space Agency‘s Automated Transfer Vehicle-3 which, fortunately, remains docked at the station owing to a communications error.

The three-member crew of the Expedition 33 mission still onboard the ISS are safe, but will move into their Soyuz vehicles in the event of a collision.

Although small, the risk of a collision has been enough to prompt Nasa to consider action, and highlights the important work done by the administration in the identification and tracking of potentially dangerous space debris.

"The three-member crew of the Expedition 33 mission still onboard the ISS are safe, but will move into their Soyuz vehicles in the event of a collision."

The satellite posing the danger is Kosmos 2251, infamous for colliding with US satellite Iridium-33 in February 2009, the first collision of its kind.

Of course, the debris caused by this collision isn’t the only threat worth monitoring. Various defunct satellites and rocket components are caught in the Earth’s orbit, and the US military’s Space Surveillance Network estimates that there at least 20,000 known pieces of debris that could feasibly collide with and damage a satellite or installation.

Having recently selected Kwajalein Island as a location for the first US Air Force Space Fence radar site, the Space Surveillance Network hopes to provide a significant boost to tracking efforts, increasing the catalogue of tracked debris from the current 15,000-20,000 pieces ten fold.

As one of three sensor sites, the installation will provide computing capability to track hundreds of objects simultaneously, allowing faster reconstruction of collisions and the provision of data when determining the best possible launch window for satellites and shuttles.

The identification and tracking of such debris is, however, only half of the battle. With Earth’s atmospheric orbit becoming increasingly cluttered, the need for a clean is becoming increasingly apparent. Blasting debris with rockets poses the risk of simply creating more debris to track, so other, more novel approaches have been sought.

"As the rate of launches increases the amount of debris circling Earth, the chance of another Kosmos-2251 incident is destined to rise."

One such method, which caught attention following its launch earlier this year, is a Swiss project know as CleanSpace One.

Developed at the Swiss Space Center at École Polytechnique Fédérale de Lausanne, CleanSpace One is the first installment of a family of satellites designed specifically to clean up space debris by de-orbiting it, effectively pulling it back into Earth’s atmosphere where it can burn up.

The proposed vehicle has a number of challenges to overcome, but its premise is sound. The CleanSpace satellite would be launched and adjust itself to reach the same astral plane as its target debris. CleanSpace will then grapple the debris and stabilise it – an extremely difficult task to achieve while travelling at speeds of around 28,000km/h, before dragging it towards the Earth’s atmosphere, where it will be burnt up by temperatures exceeding 1,000 degrees Celsius.

Volker Gass, Swiss Space Center director, stated the centre’s intent to offer and sell a family of ready-made systems to de-orbit several different kinds of satellites, while being designed to be as sustainable as possible.

"Space agencies are increasingly finding it necessary to take into consideration and prepare for the elimination of the stuff they’re sending into space. We want to be the pioneers in this area," added Gass.

With an increasing number of nations becoming space-able, satellite launches are rising exponentially. As the rate of launches increases the amount of debris circling the Earth, the chance of another Kosmos-2251 incident is destined to rise, highlighting the growing need to not only monitor debris effectively, but also remove items of particular danger.

The continuing efforts of Nasa and other space agencies would certainly reaffirm the belief that space debris is a very real threat, and one that needs further addressing.

The space shuttle is the family of manned launch vehicles used by US National Aeronautics and Space Administration (Nasa) to place payloads and crews into orbit.

The Soyuz spacecraft was designed in the 1960s by S.P. Korolyov Rocket and Space Corporation Energia (RKK Energia).

The first crew of three arrived at the ISS in November 2000, since when the station has been permanently inhabited.