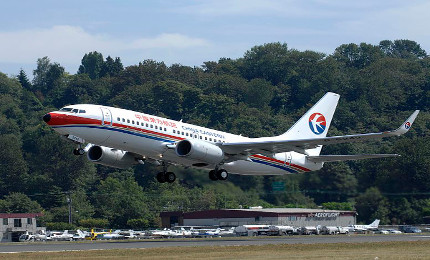 When finalised, the order will become the country’s largest-ever purchase by an airline for single-aisle aircraft.

Boeing Commercial Airplanes North East Asia sales and marketing vice-president Ihssane Mounir said: "We share an enduring partnership with China Eastern and we are excited to see that the 737 family of airplanes will play an important role in their continued success."

The deal is expected to help Google offer accurate maps with up-to-date imagery, as well as improve internet access and disaster relief, the areas the search engine has long been interested in.

The acquisition of the start-up satellite company comes at a time when Google and its rival Facebook are looking to acquire satellite and drone firms to strengthen their global market positions.

The Challenger 350 airliner was launched in 2013 at the European Business Aviation Conference and Exhibition (EBACE) in Switzerland.

Solar-powered aircraft Solar Impulse 2 completed its maiden flight in Payerne, Switzerland, moving a step closer towards a round-the-world voyage in 2015.

ICAO said that a standard could be in place in two to three years.

IATA director general Tony Tyler was quoted by Reuters as saying that the individual airlines could implement the measures sooner than that.

The development comes weeks after the release of an FBI report citing 3,960 aircraft laser strikes in the US in 2013, according to the Federal Aviation Authority (FAA).

With the help of metamaterial technology, Lamda Guard’s new thin films on cockpit windscreens selectively block and control light coming from different angles even at the highest power levels.

Opened by deputy prime minister Nick Clegg and business secretary Vince Cable, the new facility will have an annual manufacturing capacity of 2,500 fan and turbine discs, which will be installed in a variety of Trent aero engines, including Rolls-Royce Trent XWB.

To be fully operational in 2016, the plant will use manufacturing methods developed at the Advanced Manufacturing Research Centre (AMRC) in Rotherham.

Researchers at North Dakota State University (NDSU) are working with the university’s Carrington Research Extension Center to evaluate the use of unmanned aircraft system (UAS) to monitor crop and livestock research projects.

As part of the study, researchers are using UAS-mounted thermal, infrared sensors and cameras that capture images at specific frequencies to gather data from fields and livestock at specified times.

With the help of UAS technology, researchers are planning to examine plant emergence and populations in corn, soybeans and sunflowers, and nitrogen deficiencies in corn and wheat.