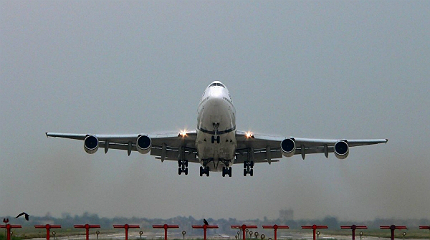 Despite concerted efforts and increased campaigning for their reduction, aviation sector emissions continue to grow at an alarming rate. Estimates place 2020 emissions levels at 70% higher than 2005 levels, even though the fuel efficiency of aircraft continues to improve by two percent each year.

Such is the expected growth of flights in the years following 2020, courtesy of growth in markets such as India and Brazil, that this figure could be 300 to 700% higher by 2030. Between 1990 and 2006, the aviation industry’s carbon footprint has grown by 98%.

"Estimates place 2020 emissions levels at 70% higher than 2005 levels, even though the fuel efficiency of aircraft continues to improve."

These figures have been compounded by alarming statistics regarding the continued expected growth of the aviation sector against the European Union’s desire to cut emissions.

The International Emissions Trading Association has reported that if total EU emissions are to be cut by 80% by 2050, then airlines would consume almost the entire allocation of CO2 allowances under the EU’s Emissions Trading Scheme.

Aviation currently accounts for approximately three percent of the EU’s total greenhouse gas emissions, with the majority coming from international flights entering European nations. In response to rapidly increasing emissions, the EU’s plan to bring airlines into compliance with the ETS was expected to save some 176 million tons of CO2 in the period to 2015. 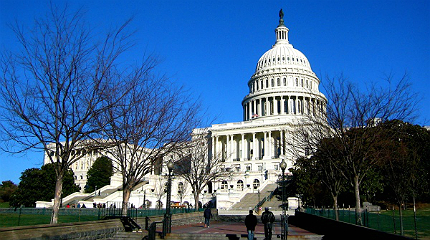 The US Senate reacted strongly to the ETS. Image courtesy of Elliot P.

The response by US-based airlines has been one of vehement protest. While noting that US airlines improved fuel efficiency by 120% between 1978 and 2011, and that 2011 saw US airlines carry 16% more than in 2000 while using 2.3bn fewer gallons of fuel, Airlines for America president Nicholas Calio said: "US airlines should not be subjected to this illegal scheme that amounts to little more than a cash grab for the European Union, as none of the funds collected are required to be used for environmental purposes."

"The EU’s plan to bring airlines into compliance with the ETS was expected to save some 176 million tons of CO2 in the period to 2015."

Protests from US airlines were heard by the US Senate, and on 24 September 2012, the US Senate passed a measure that effectively shielded the nation’s airlines from participating in the ETS.

Following the US Senate’s action, Senator John Thorne said: "The Senate’s action today will help sure that US air carriers and passengers will not be paying down European debt through this illegal tax and can instead be investing in creating jobs and stimulating our own economy."

Thorne’s point has perhaps been proven by analysis conducted by Airlines for America, with the body’s environmental affairs vice president Nancy Young stating: "The EU ETS imposes a steep levy on US airlines. Our analysis shows that the ETS will cost US airlines at least $3.1bn through 2020, an outlay that could support [more than] 39,200 US airline jobs," while also adding that the ETS will "siphon away to European coffers the very funds that our airlines need to continue investing in the technological, operational and infrastructure improvements required to meet our emissions targets."

It is this counterproductive nature of the scheme that has airline officials, rather rightfully, riled.

US airlines are not alone in this understanding, meeting with China and India and other countries on a number of occasions to discuss concerns and their opposition to the ETS, the result being the Moscow Declaration. Outlined within the declaration is a series of actions that could be taken jointly or individually by nations in order to overturn the application of the ETS to international aviation, including the imposition of additional levies and charges onto EU carriers as a form of countermeasure.

"The response by US-based airlines has been one of vehement protest."

China has retaliated to the ETS in a perhaps predictably vehement fashion, threatening to impound European aircraft should the EU penalise Chinese airlines for failing to comply with the scheme. Young remains hopeful that the EU will withdraw the scheme before retaliatory measures are deemed necessary, but remains steadfast in her assertion that similar sanctions could be on the table.

"We note that in testimony before the United States House of Representatives in 2011, the Assistant Secretary for Aviation and International Affairs of the US Department of Transportation, Susan Kurland, noted that the US Government has a number of measures it could take to respond to the EU’s wrongful, extraterritorial assertion of jurisdiction over US airlines," added Young.

What has become increasingly clear is that, with nations outside the EU continuing their fervent refusal to comply with the ETS, a mutually agreeable alternative is the best option. As Young puts it: "The unilateral and flawed EU ETS is the wrong starting point for discussions of what may be appropriate for international aviation greenhouse gas emissions policy."

A global approach to emissions 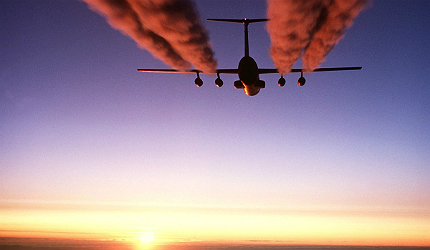 The Emissions Trading Scheme had been tasked with alleviating the problem, but has been shot down. Image courtesy of the US Air Force.

An equally appeaseable approach could be established by the International Civil Aviation Organization (ICAO), something that Airlines for America and its members support. "Under this approach, all airline CO2 emissions would be subject to emissions targets requiring industry and governments to do their part," confirmed Young.

"With nations outside the EU continuing their fervent refusal to comply with the ETS, a mutually agreeable alternative is the best option."

Such targets would likely include an annual average fuel efficiency improvement of 1.5% through 2020 and carbon neutral growth from 2020, as well as an aspirational goal of a 50% reduction in CO2 by 2050 compared to 2005 levels.

"Our focus is on getting further fuel efficiency and emissions savings through new aircraft technology, sustainable alternative aviation fuels and air traffic management and infrastructure improvements. To the extent we were not able to meet our targets through these measures; the global aviation sector position is that a properly designed market-based measure could be used to ‘fill the gap’. In our position papers, the global industry has set forth principles regarding the role that a market-based measure might play in this regard," said Young.

ICAO certainly has previous for enforcing such policies, having decades of experiencing setting standards and recommending practices and policies on aviation environmental issues. Young cites ICAO’s record of success of establishing aircraft certification requirements for noise emissions and a framework policy for addressing aircraft noise impacts as one such example.

With US airlines now protected by Senate intervention and China persevering with threats of impounding, it is hard to see a future for the Emissions Trading Scheme in its current entity. If a mutually acceptable framework can be imposed by the ICAO, with corresponding efforts more geared towards advancing eco-friendly technology, it is hard to argue against it being better placed than the ETS.

Flight of the Century – long-range electric flight becomes a reality

In July 2012 Flight of the Century will set out to break all speed and altitude records for a manned electric aircraft.