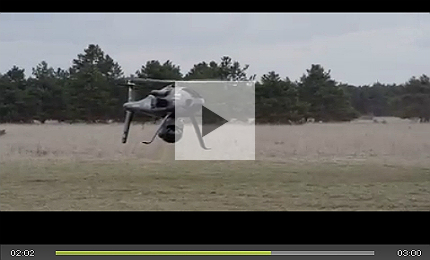 As the aerospace industry continues to refine and simplify unmanned aerial technologies, new applications are beginning to emerge. UAVs are still predominantly used by the world’s militaries, but they are also increasingly being considered for a growing range of civilian tasks, from firefighting and security to pipeline surveillance and scientific research. Today, these versatile vehicles are even beginning to make their mark on the film industry.

Shooting footage from the air is an area that is still dominated by manned helicopters and crane-mounted cameras, but UAVs, which offer filming options which are otherwise hard to achieve, are starting to carve out their own niche in the entertainment industry. For adventurous cinematographers, advanced UAV features such as precision manoeuvring and automated navigation have the potential to offer new creative options, even in hostile or outright dangerous conditions.

The particular requirements of the modern film shoot provide an interesting test-bed for unmanned functions. In order to achieve spectacular high-definition footage from the air, UAVs must be easily controlled and have a high level of stability in a range of conditions, as well as being seamlessly integrated with bulky high-definition cameras.

"The latest automated features of advanced UAVs have the potential to offer new filming possibilities to adventurous cinematographers."

The S-100, combined with a Cineflex gyro-stabilised camera, underwent a successful filming trial in Austria, producing results that provoked excitement about the impact that advanced UAVs could have on the film and broadcast industry down the road.

"It was a dream of mine to find a way to fly the Cineflex remotely; I just never thought it was possible," said Brain Farm’s founder and CEO Curt Morgan back in April.

"Now with the use of the Camcopter S-100 UAS my dreams have become a reality and I’m very excited for what the future holds with these advancements."

Hans Georg Schiebel, Schiebel’s chairman, was also confident about what the S-100 could offer the film industry.

"The Camcopter S-100 UAS can carry a variety of cameras suitable and capable of providing the high definition accuracy so important to today’s film and television directors," he said.

"Its ability to hover and precisely manoeuvre for extended periods of time, offering a truly stable platform, provides another dimension of artistic freedom from a basic set to extreme situations beyond manned limits." 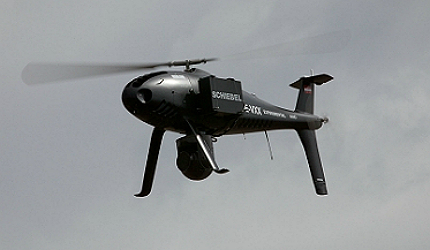 As things stand today, unmanned vehicles are primarily used for shoots that would be dangerous or impractical for a manned vehicle.

In the wake of the test shoots, we spoke to Schiebel to discuss the challenges of unmanned aerial camera work. Stability is obviously a key factor for shooting distant action with clarity and precision, and the S-100 uses a combination of systems to ensure that the platform can compensate for the sudden gusts that are common at its typical operating altitudes.

"No matter how accurately you have the aircraft in the sky, it will still always be moved because of wind and gusts."

"There are two levels of stability," Schiebel says. "One is the positional accuracy of the platform itself, and that’s done by our unique flight control, which consists of an inertial navigation unit and sophisticated control algorithms.

"However, the key thing is that no matter how accurately you have the aircraft in the sky, it will still always be moved because of wind and gusts, so the second level of stability is the camera itself.

"So you first have an aircraft that is extremely stable and holds its position or follows a pre-programmed route, very much like a camera crane.

Then, in addition, you have the camera, which holds the lens very stably on the point you want to film. That’s a very effective combination."

While the S-100 can be flown by a remote operator, it is also capable of operating autonomously, navigating by pre-set GPS waypoints. "It’s pretty much like a videogame that really happens," says Schiebel.

"You programme points in the space, and you give directions on the speed and the angle with which the aircraft should move from one point to the other, in all dimensions."

For Snaproll Media’s Preston Ryon, who was present at the Camcopter tests in Austria, precise automation makes options available that would be difficult to achieve using a manned helicopter.

"You can repeat the same moves precisely, because you can programme it to repeat the exact space you were in," he says.

"So if you were filming some sort of change, you could send this thing to the same place, the same time every day and do the exact same move. That’s a feature of it that’s extremely amazing."

Despite the excitement surrounding these new filming possibilities, the S-100 is not a platform that has been tailor-made for aerial cinematography, so there are inevitably a few kinks which need to be worked out if it is to become the first advanced UAS to make a major breakthrough into the film industry. "I think the most obvious [change] would be a retractable landing gear, so you have true 360-degree viewing from below," says Ryon. "Because to make filming dynamic with any type of aerial platform, it’s optimal to get the foreground in there, which means you’re at an altitude where things are between you and the thing you’re filming. So if the landing gear gets in the way it kind of ruins it."

The film industry and the unmanned market

"It makes sense to start filming the most dangerous things with a UAV, so you’re not jeopardising human life."

Both Schiebel and Ryon acknowledge that the unmanned aerial market is still young, and it’s likely that it’ll take some time before these two industries take full advantage of one another.

As things stand today, unmanned vehicles are primarily used for shoots that would be dangerous or impractical for a manned vehicle.

"It makes sense to start filming the most dangerous things with a UAV, so you’re not jeopardising human life," says Ryon.

"When there’s something like a volcano, something that could take out a full-size helicopter – this is something you would send in first. Even in Japan, when they had the scare with the nuclear power plant – that’s the type of thing it could be useful for. When someone calls us and says they need to fly 1,000ft overlooking a city, we say go rent a helicopter, because that’s not an option yet. So I think it will start with specialty use filming, and then from there it’ll become much more the norm."

The UAV market for filmmakers is currently dominated by more basic high-end remote-controlled helicopters, where restrictions on altitude and other factors prevent these smaller units from beating manned helicopters at their own game.

But as larger, more advanced systems get exposed to the film industry, the options will start to open up, and a proven platform such as the S-100 could be just the right vehicle for the job.

The RQ-11B Raven (Raven B) is a lightweight and low-altitude remote-controlled unmanned air vehicle (UAV) system designed and developed by AeroVironment, US.

"It’s on its way, with the large systems like the S-100," says Ryon. "The redundant systems and the testing that’s gone into that helicopter – it’s amazing. It’s as complex a system as any manned helicopter. It accounts for every single nut and bolt, it’s fully tested and documented and re-tested; it’s not modified hobby stuff."

From the avionics side, Schiebel notes that working with the requirements of the film industry gives the S-100 a more diversified set of applications, which in turn broadens the company’s experience and opportunity to develop new features, both for the film industry and outside of it.

"We’re always learning," says Schiebel. "Even when we’re working with the navy, we learn stuff that may be great for pipeline surveying, and then we work for pipeline surveyors and we might learn stuff that would be great for the Special Forces. The same will apply to filmmaking; you keep learning all the time. It’s a young industry, and there’s a lot of room for improvement – just look at how much avionics have changed over the last 20 years."