Boeing forayed into commercial aviation by launching its first aircraft, the B&W Seaplane, in 1916. The company went on to develop several small passenger and military aircraft in the two decades that followed,  becoming a frontrunner in all-metal aircraft construction.

Boeing introduced its first commercial jetliner, the 707, in 1958. The launch of 747 long-range airliner with much larger seating capacity than other commercial aircraft in 1970 further strengthened Boeing’s position in commercial aviation.

Rival Airbus had a modest beginning with the launch of the A300B, which is based on the A300 wide-body jetliner. Airbus received its first order for the A300B from Air France in 1970.

Airbus didn’t become a significant competitor to Boeing until the 1990s when it started launching several competing products such as the A330 and the A340.

The commercial aircraft market, which is a major revenue driver for aerospace companies, is fully dominated by Boeing and Airbus, which together hold 99% market share.

Airbus has, however, slowly eaten into Boeing’s pie of the large commercial aircraft market by scaling-up quickly in a booming aviation market.

“Although Airbus didn’t become a significant competitor until the 1990s, it has slowly eaten into Boeing’s pie of the large commercial aircraft market.” 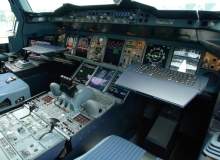 787 Dreamliner vs A380: cockpit comparisons

Airbus vs Boeing: which has a better geographic diversification?

Airbus’ revenues are better diversified and are from markets that have high growth potential such as the Asia Pacific, especially China. The company earns more revenue from Asia Pacific (36.6%) than Europe (27.9%) and the two regions together contribute approximately 65% to its gross revenue.

Although Boeing too earns a similar chunk of its revenues (70%) from just two geographic areas namely the US (44.2%) and the Asia Pacific (25.6%), its revenues are more concentrated in the US, unlike Airbus, which has a better diversification. Airbus also earns higher revenue from the Asia Pacific, which Boeing too recognises to be a crucial market for its future growth.

Leveraging state benefits – reflection in the geographic concentration of revenues

While the quick growth of Airbus can be attributed partly to the boom in commercial aviation, the feat wouldn’t have been possible without state benefits, which the US claims are unfair.

The geographical distribution of revenues of the two companies is evidence of just how much Airbus benefits from state support.

Boeing’s revenues are concentrated in North America, whereas Airbus is benefitted by European state support.

North America has been dominated by Boeing for a long time, with the majority of its revenues coming from the US (44.2%) alone, whereas its counterpart earns just 17.5% of revenues from North America.

Europe to Airbus is what the US is to Boeing. European revenue contribution for Airbus (27.9%) is more than double compared to Boeing (12.8%).

Airbus has been struggling to grow its revenues in the last five years, having registered a CAGR of 0.97% since 2014 compared to its rival Boeing, whose revenues grew almost three times faster, at 2.74%, over the same period.

This partly explains why Boeing is better placed to absorb any potential financial shocks of multiple grounding incidents that may affect sales.

“Boeing has better diversified segments as well as earns higher margins than Airbus.”

Reliability – is Boeing losing out to Airbus in its biggest segment?

Incidents such as grounding due to serious technical issues could mar the reputation and sales of commercial aircraft manufacturers.

Airbus planes have suffered no major grounding issues apart from a temporary grounding of 14 Airbus A320 Neo aircraft in India due to P&W engine woes in 2018.

Boeing has had to deal with two major groundings. Its entire global fleet of 737 Max aircraft was grounded in March 2019, following two fatal aircraft crashes. The company had an order book of 4,636 units worth $600bn of the 737 Max family at the time of the grounding and continues to face order cancellations from several airlines.

Earlier in January 2013, the Boeing 787 Dreamliner fleet was also grounded due to issues in onboard lithium-ion batteries. The grounding, however, didn’t cause a significant impact on the 787 orders and deliveries as the US Federal Aviation Administration (FAA) allowed US carriers to operate Dreamliners after making the required changes to battery systems in April 2013.

“Boeing continues to face order cancellations for its 737 Max family, whose order book at the time of grounding was worth $600bn.”

A look at Boeing’s legacy indicates clear benefits from a strong state, while Airbus is no different.

The roots of Airbus, in fact, lie in state interests and the company continues to be backed by EU nations, with the governments of Germany, France, and Spain currently holding 11.04%, 11.06%, and 4.16% stakes, respectively.

Competition has, eventually, resulted in legal fights by the governments to safeguard their respective business interests.

The US Government filed a case with the World Trade Organization (WTO) in 2006, against the EU subsidies worth $22bn to Airbus for new product development. The WTO’s verdict in 2010 confirmed that Airbus received $18bn of illegal subsidies, including $15bn of launch aid from the three governments that have interests in Airbus.

The EU filed a counter case against the US alleging $23bn indirect subsidies to Boeing. In March 2011, the WTO ruled out a major part of the allegation stating that 80% of the subsidies were found to be fair.

The EU filed another case in 2012, alleging that the US failed to abide by the findings against it. A compliance panel set up by the WTO to assess the appeal rejected 28 of the 29 claims made by the EU, in June 2017.

The US has retaliated by requesting the WTO to impose approximately $11bn in annual countermeasures to offset the damaging trade effects of the subsidies enjoyed by Airbus.

Most of the commercial aircraft models being manufactured by the two companies are close competitors, the most popular ones being the Boeing 737 family and the Airbus A320 family of aircraft.

Airbus’ product portfolio is differentiated by civilian helicopters that include models ranging from light single-engine to twin-turbine heavy-lift rotorcraft, where Boeing has no presence.

The below table compares the product portfolio of the two companies:

Airbus loses out to Boeing in the missiles systems category, where it has no direct offerings, although it holds a 37.5% stake in European missiles developer and manufacturer MBDA. Boeing also has a competitive edge in the ballistic missiles space since MBDA doesn’t produce them.

“Airbus loses out to Boeing in the missiles systems category.”

Both the companies are eying the potential mass markets in different applications.

Boeing, on the other hand, aims to capture the on-demand air deliveries market and has already developed a demonstrator cargo air vehicle named HorizonX.

Airbus is counting more on start-ups, broad-basing its innovation efforts, by setting-up innovation centres housing start-ups and offering technical and funding support to start-ups in select areas such as autonomy, electrification, and security.

Both the companies have sensed the potential threat of competition emerging from countries like China and have established innovation centres in China. While the Airbus China Innovation Centre focuses largely on the company’s global factories, Boeing’s Chinese innovation centre is focused on innovating and improving exclusive access for the Asia Pacific market. China contributes more revenue than the rest of the Asia Pacific for Boeing.

“Airbus spends as much as Boeing in R&D, despite its smaller scale of operations compared to the latter.”

Military aviation – who wins the game?

Although Airbus’ deck in this space is not empty, six of the eight military rotorcraft it offers are based on civilian helicopter platforms. The other two platforms Tiger attack helicopter and NH-90 multi-role helicopter are comparable to Boeing’s offerings in their respective categories but have lower sales than its rival. Tiger and NH-90 mainly serve the EU countries, where Boeing too competes, but have zero sales in North America.

Airbus also has just a single product in the fighter aircraft segment unlike Boeing, which has advanced fighter jets such as F-15 Strike Eagle and F/A-18 Hornet that are offered in multiple variants. The only fighter jet Airbus offers is the Eurofighter Typhoon, which has no variants to suit customer-specific mission requirements.

Boeing, thus, has a clear competitive edge in military products over Airbus, which misses out fully on missiles and partly on helicopters and fighter jet varieties.

“Boeing has a clear competitive edge in military products, over Airbus.”

What the future holds

The immediate future for Boeing and Airbus looks equally uncertain as both have their own set of challenges to overcome.

For Boeing, the immediate threat is further crashes or failures of the 737 Max, which can result in order cancellations and litigations that could affect revenue and market share in a crucial business segment.

For Airbus, the looming threat is the $11bn annual countermeasures proposed by the US for alleged unfair trading, which, if imposed, would cause severe financial pressure and greatly reduce its competitive position.

If both emerge from scandals safely, Airbus would continue to compete with Boeing’s commercial aircraft as well as Space businesses. Defence and Security businesses, where Airbus has been weaker, can partially offset the effect for Boeing, whereas Airbus will have no similar offset.

Further, the success or otherwise in highly scalable new businesses such as urban air commutation and local air cargo deliveries could flip their position either way.