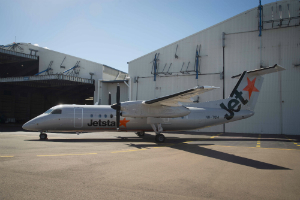 Aerospace coatings by PPG (NYSE:PPG) are adding the distinctive silver sparkle to the Jetstar livery on five Q300 turboprops repainted for the airline’s new regional service in New Zealand.

DESOTHANE® HD/CA 9008 basecoat-clearcoat exterior topcoat system by PPG was selected for the Jetstar aircraft because it provides a colour-rich high-gloss finish that weighs less than traditional systems, for improved aircraft fuel economy, and is easier to apply. PPG coatings experts recommended that silver mica flakes be dispersed in a separate clear coating applied between the grey basecoat and final clearcoat layer for a brighter, more shimmering appearance and added protection.

"It was important to Jetstar to achieve the special-effect silvery shine on its livery because it is part of their branding and an important asset," said Selma Ljubuncic, PPG senior account manager for original equipment and commercial airlines at its Tullamarine, Victoria, Australia, application support centre.

Ljubuncic called on PPG’s technical service representatives Ken Foo in Singapore and Craig Pedersen in Irvine, California, for their expertise during the repainting of the first aircraft by Flying Colours Aviation. Foo and Pedersen were on-site at Flying Colours Aviation’s Townsville Airport paint facility to make sure the PPG Desothane HD system’s superior aesthetics were achieved along with ease of application.

Flying Colours Aviation was already acquainted with the painter-friendly benefits of the PPG system, including its environmental adaptability, high-quality gloss and fast-drying basecoat. "We have a very good relationship with Flying Colours Aviation, which has used the Desothane HD basecoat-clearcoat system by PPG and is very comfortable with it, so we knew we had a good team," Ljubuncic said.

"Using the PPG coatings enabled us to reduce the full strip-and-paint process to an industry-leading 11 days," said Linda Armstrong, managing director of Flying Colours Aviation. "We have used the PPG basecoat-clearcoat system on many aircraft, and as usual the paint system did not disappoint. The finish and gloss levels were of a high standard, and Jetstar are extremely happy with the end result."

Having the mica dispersed in a separate clearcoat instead of within the coloured basecoat gives the aircraft the brilliant shine Jetstar wanted while ensuring good application properties, according to Ljubuncic.

Jetstar had the five Q300 turboprops formerly used by QantasLink repainted as its first to fly under the Jetstar brand.