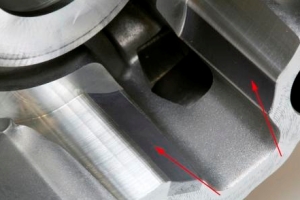 From the idea to operate a coating process without the use of chemicals, AHC Oberflächentechnik in Germany developed a novel method for the oxidation of aluminium surfaces. With this process components can be protected selectively against wear and corrosion. A pilot plant is located in the French subsidiary Faulquemont. Now, the process is ready for serial production.

The so-called LASOX-COAT® treatment by AHC Oberflächentechnik is used for the selective coating of aluminium surfaces via laser. While the workpiece is under an oxygen atmosphere, the laser is targeted along the surface to be coated. The laser starts to melt the alloy and some particles will vaporize. Together with the oxygen this leads to the formation of an oxygen plasma.

The major advantage of this process in contrast to galvanic processes lies in the complete abandonment of chemicals. Also no pores are formed in the aluminium oxide layer, which explains the increased hardness. Pores in the basic material will affect the layer growth negatively. Silicon helps to grow a thicker but slightly rougher layer and even alloys with more than 20% silicon can be coated with LASOX-COAT.

The possibilities of the selective coating are plenty, like writings, single lines, complex forms or patterns. While flat surfaces are preferred, round surfaces are also possible. An integration of LASOX-COAT into existing production lines is also planned. LASOX-COAT is best for wear protection but can also be used to reduce corrosion on the workpiece.